Getting In and Out 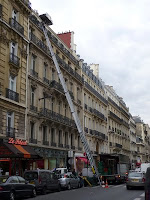 Many apartment buildings in Paris seem to have been designed with absolutely no consideration for moving anything larger than a hot plate into and out of apartments. Up to just a few decades ago, elevators were rare, even for buildings with eight or nine floors (roughly the limit imposed by Paris zoning laws historically). Since stairways were often relatively tiny as well, I have to wonder how people got furniture in and out of these apartments in the old days.

Today, it's a bit less of a problem. True, if you order a new television set or sofa, two or more burly furniture delivery men will still wrestle it up the stairway if necessary (elevators, even when they are present, are often too small to hold anything more than one average-sized person). But if you are moving lots of things, the easiest way to get them in and out is via the windows, if windows of suitable size are available (and they often are). 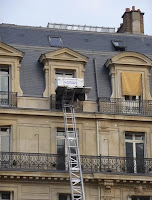 Doing this requires a clever contraption with a flat, open platform that is winched up one or more floors at a very steep angle on guide rails. It seems that most Parisian moving companies have plenty of these gadgets on hand. It's routine to see one of them sitting on the sidewalk, with its boom carefully adjusted to reach right up to the window of an apartment, and moving men raising furniture up to the window or lowering it down therefrom with the winch. With something like this, you can move sofas, big-screen TVs, perhaps even pianos (although I haven't seen that).

The first time I saw this, it looked very odd, but I'm used to it now. Where I was born, people have sprawling, single-level homes, with big doors, and the movers use nothing more complex than a ramp leading into the moving van. It's just one of the many, many differences between Paris and my hometown—nearly all of which strongly favor Paris!

I always feel guilty about ordering anything bulky for delivery, since, as I've said, these handy devices are not usually used for delivery of single items. The delivery guys always have to struggle to bring stuff up the stairs, if it won't fit in the tiny elevator. I suppose they are paid for it, but I suspect they aren't paid very much (nobody is paid very much for anything in France).