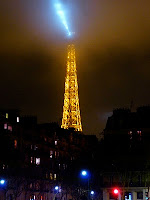 Tonight while walking home I saw the Eiffel Tower partially shrouded in fog, which isn't unusual. For some reason it looked like a giant alien spaceship looming over the city from where I was, which is a bit unusual. My imagination must have been especially sharp tonight.

When the weather is like this, it's useless to go to the summit of the tower. All you see is mist, and it's cold and damp. The searchlights at the top of the tower managed to pierce the mist a bit, but most of the time the summit itself was completely hidden. Once in a while it would briefly peek out of the mist.

My aviation-oriented brain notes that this would be a full overcast at 1000 feet AGL.

If you know Paris really well, you'll be able to figure where I was when I took the picture. 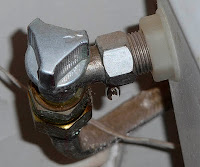 Although it hasn't been covered much by the media, the Paris Catacombs were vandalized more than a month ago (mid-September). Someone managed to sneak into the underground galleries during the night on a weekend, and did a huge amount of damage, tearing out the centuries-old bones from their neat stacks and sculptures, smashing them, and tossing them onto the floor, “with a pickaxe” according to some reports. The Catacombs will thus be closed at least until the end of the year, so that things can be cleaned up. Some of the damage is permanent, of course, since the bones cannot be replaced.

These vandals apparently did not enter the Catacombs through the official entrances … which requires some explanation. There are some 300 km of underground galleries under Paris, many of them formerly serving as stone quarries for the buildings above. (I'll refrain from commenting on the wisdom of quarrying stone for buildings from locations right beneath their foundations, apart from pointing out that the practice was stopped nearly two centuries ago.) There are innumerable entrances into this underground maze, the vast majority of which are closed and locked by the government. However, some people make a hobby of breaking into the network and exploring it, which is both illegal and dangerous. There are no lights, there are many areas that are underwater or otherwise hazardous, it's very easy to get lost … and nobody can hear you scream.

It seems that the vandals broke into one of these locked entrances and then somehow made their way into the very small portion of the galleries that make up the public Catacombs that are normally open to tourists during the day.

The public portion of the Catacombs consists of a clean, relatively roomy, and relatively well-lit path some nine stories underground, running for 1.7 kilometers (more than a mile). Security gates with locks block every detour from the one path open to tourists, preventing people from wandering off or getting lost (voluntarily or involuntarily). The vandals got past this in order to do their deeds. The Catacombs are protected and locked at night, but it's only reasonable security, not bank-vault security—the possibility that someone would break in and try to destroy them out of sheer malice had apparently not occurred to the authorities, which is somewhat understandable.

I suppose that now many of the careful stacks and sculptures of bones respectfully created by those who originally carted the bones into the Catacombs will never be the same now. I suspect that they went after the most famous areas, too. We'll see when the Catacombs open again.

In the movies, a ghostly hand would probably reach out from the bones, grab the vandals’ ankles, and hold them until they were dead and transformed into bones themselves, in retribution for the desecration of the site. Unfortunately, in real life, nothing happens to stop them, so they just make a shambles of the entire site with impunity. The police have no leads.