I come to save snails, not to eat them

I was walking home through the snooty Sixteenth for a change, on a day that was becoming increasingly warm despite heavy rains the night before, and I happened across a fleet of snails trying to cross the asphalt sidewalk in front of me. There were a dozen of them or so, all moving at a snail’s pace (of course). The asphalt was dry and extremely hot, and I became concerned that these snails would not make it to safety before dehydrating, as they depend upon their snail-slime when moving, and the supply of that is in turn closely related to their hydration. 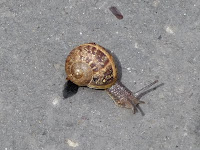 So I hit upon an idea. I went to the first supermarket I could find and bought a jug of water. Then I returned to the spot with the many snails and poured some water around them on the sidewalk in order to provide a non-dehydrating path to safety. A man passing by suggested that they might drown, however, which seemed plausible (my knowledge of snail respiration being rather limited), and he commented that it might be easier to just carry them to safety. Additionally he suggested that a nearby planter might be the source of the snails, as well as their salvation. The planter was about a meter off the ground, and it was hard to imagine how the snails could have made the trip from the planter to the pavement, but it was the only place nearby that might have harbored snails, as far as I could tell.

So this man and I picked up some snails and carefully put them in the planter. Some of the snails had their shells broken, but they were not squished, which would be consistent with a fall from the planter onto the pavement. Perhaps they tried to escape flooding in the planter during the rain (?) and were unable to hold on to the sheer, textured concrete wall of the planter. Anyway, I returned all the snails I found, including the ones with broken shells, although I wasn't optimistic about the future of the latter. I then poured the remaining water around the planter so that it might remain moist for the snails benefit.

I don't know how many ultimately survived. But just leaving them to die on the hot asphalt was out of the question. I was surprised that anyone offered to help, but perhaps the man who helped simply thought he was humoring a psychotic or something. French people are usually very diffident, and are not the type to lend helping hands to strangers.

I don't know the species of snail that I found. They looked a lot like the kind that end up on people's plates at some restaurants. These, hopefully, will lead a happy and unmolested life, if they survived the encounter with the hot asphalt.

(By the way, sidewalks in Paris are paved with asphalt, not concrete. The roadway is usually asphalt, too, although cobblestones are still quite common in Paris, thanks to their easy maintenance and superior wear characteristics.)

A&F on the Champs, assault at the Lipp, nuclear power 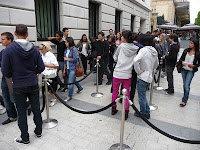 A few days ago, a new Abercrombie & Fitch store opened on the Champs-Élysées. The Champs is the standard location for flagship stores of famous brands. I was moderately surprised to see a line in front of the store, which occupies the very pretty building that used to belong to Thai Airways. I'm not sure what the store contains that justifies waiting for an hour in line, but what do I know?

The store has an interior garden protected by an ornate gate, and a sign next to the gate says that A&F was founded in 1892. The sign is designed to look hundreds of years old, even though it has only been there for only a few days. I suppose some people will actually believe that the store is more than a century old. But today's A&F is only 23 years old at most, not 119. The original A&F went bankrupt 40 years ago, and today's Abercrombie & Fitch was part of the vast kingdom of brands owned by Limited Brands until 1998 (it is independent now). This is the store that sells push-up bikinis to seven-year-olds, something that David Abercrombie and Ezra Fitch could have scarcely even conceived back in 1892. 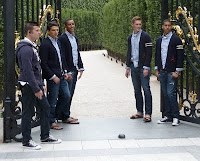 At the gate of the store complex, there are bouncers/greeters of a sort. At first, I thought they might be hobos hired off the streets to work at the store, but then I noticed that they were all wearing the same hobo-garb, and it dawned on me that it was actually a store uniform, right down to the left shirttail strategically left outside the jeans. They still looked like hobos to me, but these were hobos who were probably wearing $400 worth of clothing. Marketing is a strange business, and the influence of Limited Brands, expert in that domain, can be seen here. I imagine that current A&F management has taken that further.

Anyway, moving right along … a few days after this, on a very nice afternoon in the city, I was assaulted by an employee of the Brasserie Lipp, right in front of that famous coffee shop. I was taking a picture of a sign at the entrance of the restaurant that emphasized a dress code, which is a rather quaint and over-the-top anachronism for a coffee shop, no matter how famous it might be. As I took my picture (video, actually) from the sidewalk in front of the place, a man scampered out of the restaurant and struck my camera. He insisted that I couldn't take a picture without permission, even though the sign is visible from public right of way and is designed to be so (not much point in keeping a dress code secret until after someone enters the restaurant, is there?). He didn't seem to understand this. His devotion to his job was as touching as his lack of intelligence was worrisome. You have to really like your job to risk a prison term for it. Of course, the camera was running, so it recorded the assault. I suggested that a video of his assault on YouTube might draw a lot more views than a simple picture of the sign, and he said he didn't care about it being posted to YouTube—which sounded like an autorisation de publication to me. (Unfortunately, I can’t stand the sound of my own voice, which is audible on the recording, so I probably won't bother posting it.) Judging from his fin-de-siècle personal grooming (which makes it easy to ID him in the video), I rather doubt that he'd care about anything that runs on newfangled electricity, apart from cameras pointed at his dress-code sign.

The last time something like this happened was in 1997, when a rent-a-cop in front of Fouquet's assaulted me because I was measuring the intensity of light on the restaurant terrace with a light meter (which he incorrectly believed to be a video camera). There again, I was on the sidewalk, doing nothing actionable or illegal, but Robocop made physical threats against me just the same.

Sometimes I consider filing a complaint against these losers, but why should I have to spend time and money on legal remedies just to get people to behave? And even if they behave temporarily, they're just going to make the same mistakes again, because they're too stupid to learn not to.

I do note that both Fouquet's and Lipp are among a handful of exceptionally snooty establishments that somehow still remain in business in Paris. Fouquet's used to turn away unaccompanied women, and forbid them at the bar (not sure if this is still in effect), and Lipp segregates guests by social rank. And so on. Not the sort of place I'd frequent, but some people like that.

It's unfortunate that France is simultaneously so photogenic and yet so hostile to photographers.

Today I was walking past the Hôtel de Ville (City Hall), when I came across a small anti-nuclear demonstration. The demonstrators were demanding that France abandon its nuclear power program. Never mind that 85% of electricity in France is generated by nuclear plants, with a spotless safety record. Some of the demonstrators actually suggested that France return to coal, oil, and gas-fired power plants. They must be very paranoid indeed about nuclear power to prefer the myriad disadvantages of fossil-fuel plants to the cleanliness and safety of nuclear power. It all seemed very irrational to me—especially when I noticed that many of the demonstrators (some of whom had dressed up in cute costumes with cute props) were puffing away on cigarettes. In any case, I made a brief video of the demonstration, which you can see here.

One thing curious about this demonstration was that I noticed no real media presence. I couldn't find any mention of it in the newspapers. I guess it wasn't considered newsworthy. It was a rather small protest, but not so small that I'd expect the media to ignore it entirely.
No comments: