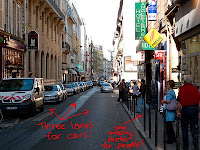 Like virtually all European cities, Paris was founded and prospered long before automobiles came along, and many of its streets are designed only for pedestrians and the occasional cart and horse, not for SUVs and Hummers. Despite this, the city has gradually been forced into yielding to the automobile over more than a century, and the results are grim (in my view).

A typical small street in Paris has several lanes reserved for cars, and only a very, very tiny space reserved for sidewalks. There are many streets that have “sidewalks” that are only about 18 inches wide. Pedestrians are thus forced to walk in the street half the time, and that's dangerous, not only because of cars, but especially because of motorcycles, which routinely pass between lanes of cars at high speed (it's illegal, but this is France).

The street where I work is no exception to this rule. Three lanes, two for parking and one for driving, are reserved for cars. The tiny sidewalks are barely a yard (one meter) wide. You can see from my picture that there are lots of pedestrians struggling to walk on the sidewalk without stepping into the street (where they might be killed by an illegal motorcycle), whereas the vast expanse of pavement reserved for cars is largely empty.

The current mayor has tried hard to reduce vehicular traffic in Paris, but I don't believe he has attacked this problem yet. I wish he would.

Pain in the Ash

Some days ago, a volcano erupted in Iceland. That's not especially unusual, nor even very newsworthy, since volcanoes erupt in Iceland all the time; Iceland is somewhat the European capital of volcanoes (with Italy probably running a close second). But there was a bit of a problem with this erupted, in that it was spewing out hundreds of tons per second of particularly nasty volcanic ash—and prevailing winds aloft were carrying the ash directly towards the rest of Europe.

Aviation authorities did the prudent thing and halted air traffic over the Continent. That's something that routinely happens everywhere when huge plumes of volcanic ash threaten aviation. The difference here, though, was that the ash was drifting over an area that is home to 600 million people, with some of the busiest airspace in the world. Stopping air traffic in this area thus became very painful financially to many companies within a short time.

Safety dictates that aircraft not fly through volcanic ash at all. Ash of the kind being coughed up by Ejyafjallajökull isn't like sand or ordinary dust: it is made of microscopic, jagged, sharp pieces of glassy rock that can chew through just about anything far faster than ordinary sandblasting. Worse yet, the ash has a relatively low melting point—lower than the internal temperatures in jet engines—so first it chews away at engine parts, then it melts inside the engine and clogs it up. Sometimes the engine stops. Even if the engine doesn't stop, it may suffer millions of dollars worth of damage and fail shortly thereafter.

The damage doesn't stop with engines. The ash can sandblast windows, turning them opaque within minutes, making it impossible for pilots to see outside the aircraft. It can block pitot tubes, which are essential for determining the speed of the airplane (failing pitot tubes are one possible explanation for the crash of Air France Flight 447 not so long ago).

Anyway, it would be foolish to fly through this ash, and the few aircraft that inadvertently did so suffered great damage (historically, there have been many incidents of engine failures and damage from volcanic ash in aviation). So air traffic had to be more or less grounded in Europe, given the way the wind was spreading ash all over the place, like spreading frosting on a cake with a spatula.

In theory, there's nothing to be done about this. It's nature, and it's something you just have to try to put up with. But in this case there was too much money at stake to just sit by and accept reality. Lots of greedy airlines wanted to restore their revenue streams, come hell or high water, and they put pressure on government bodies. Eventually, the authorities decided that safety wasn't that important, after all, and that money should be given priority, and so the airspace over Europe was reopened.

Fortunately for everyone, the ash cloud was beginning to diminish at about the same time. This gave airlines the mistaken impression that they were right, and that the authorities had been too cautious. In fact, we were just lucky. The planes are flying again now.

I didn't actually see any ash clouds over Paris, even though high-altitude ash plumes swept over us. I didn't see any ash falling on the ground, either, nor did I smell anything. However, since my reasoning is not crippled by greed, I know that the mere absence of visible ash doesn't mean that anything is safe. I was somewhat concerned about breathing the ash (which can cause lung damage), but fortunately the ash stayed high in the sky and didn't fall over Paris (although it certainly fell in places in the U.K.).

I worry that the fact that airlines got away with being careless this time may encourage them to compromise on safety in other ways in the future. Airlines care only about money, not safety. They remain safe only as long as it is economically expedient to do so, which means that they remain safe mainly out of a fear of being heavily fined for any lapses in safety, as well as out of a fear of scaring off passengers if they have accidents. But if those two factors weren't around to twist their arms, the airlines would cheerfully operate with zero safety. Some of them are still taking chances as it is, as they have with this ash cloud.

I made the mistake of buying baguettes—those long, skinny loaves of French bread—again a few days ago, against my better judgment. Sometimes it's hard to find any other type of bread. Of course, by the time I got home, they had turned to rock. Stale baguettes (that is to say, baguettes that are more than 3 hours old) are among the hardest objects known to man, after diamond and corundum crystals. The bullet-proof crust cannot be broken by normal mammalian teeth, and the interior tastes like cardboard. Any attempt to break the stale baguette into pieces produces a shower of bread crumbs that scatters in every direction. Freezing does not arrest the hardening process.

I had to look around for a store that had some sort of bread that would keep for longer than a few hours and was soft enough to actually eat. This afternoon I found a bakery that had something that looked acceptable, so I bought some of that and threw the remaining concrete baguette out.

I have come up with a useful idea, though: baguettes could conceivably be put to work as a dual-use technology, and could be shipped to Marines in Iraq. They could be frozen, ready to bake, and all the Marines would have to do is put them into an oven. Once they were baked, they could be removed, slathered with butter and Brie cheese, and eaten to provide a delicious lunch. However, any baguettes that were still uneaten after two hours could be mounted into special launchers on Apache helicopters and used as armor-penetrating missiles to break into reinforced concrete bunkers, which any three-hour-old baguette should be able to manage with ease. Thus, first it's lunch … then it undergoes a Hideous Transformation into a deadly weapon!

That would make the disposal of uneaten baguettes less of a problem. Currently, they are thrown into the trash and they end up in landfills, where they eventually become embedded in the Earth's crust and block the movement of tectonic plates. So it would be good for the environment, too. 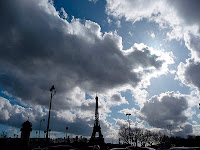 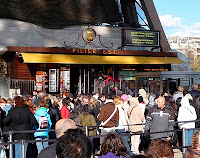