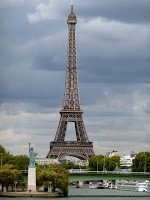 One advantage of digital technology is that it costs essentially nothing to produce digital photos or videos, once you have the equipment. This allows me to go out and take pictures or videos freely … one of the few activities that I enjoy that doesn't cost lots of money. As my school has given me very few hours of teaching lately, I've been shooting more videos in order to take my mind off the fact that fewer hours mean even less money to live on.

I finally did a video on the Promenade Plantée. It’s 23 minutes long, which is about ¼ of the time required to walk it in real life. It’s the only video that someone has disliked so far. Maybe it’s a bit on the long side. But I did want to show how the parkway looks. And much of it is in my hand-hand traveling “you-are-there” style.

I’ve also done a throwaway video on the rue de l’Échaudé, a tiny, quiet street in the Latin Quarter just slightly off the beaten track of tourists. Despite its proximity to the touristy areas, it's usually almost deserted. I selected it just because I liked the quiet of the street; it has no particular sights of interest.

And I’ve also finished a video on the Marché d’Aligre, a market on the east side of town. People talk about it in the same way they talk about the rue Cler (i.e., they exaggerate a lot), but it's really a street market like any other in Paris, and street markets are legion in the city. I suppose visitors come to the city, see one street market, and are struck by its charm, and assume that it is unique. But Paris has street markets in every neighborhood, and they all have that same charm … that’s one of the attractions of Paris.

I found many of the merchants at the market to be very hostile. France is a country that is hostile to photographers generally, which is unfortunate since it is very photogenic. Some degree of paranoia is par for the course whenever you take pictures in public. But this market was worse than most. I felt as though I was not welcome there, whereas at most street markets the merchants seem to be happy to see customers. Maybe I looked too European, although there were plenty of customers there who looked very French. The merchants seemed mostly to be of recent immigrant ancestry, so perhaps they regarded those who are obviously not of the same ancestry with suspicion. They weren’t all that way, but enough of them were like that that I don’t have any pressing desire to shop there in the near future. I just wanted to get it on video because some visitors to Paris ask about it, having read wonderful hyperbole about it in a travel guide somewhere.

In other news … today is Bastille Day, the French equivalent of the Fourth of July in the United States. There’s a huge parade on the Champs each year on this date, although it’s essentially a military parade and some French people question the appropriateness of a strictly military parade these days. There are also huge firework shows throughout France in the evening, especially the big one at the Eiffel Tower. The crowds watching the parade are enormous, so I’ve never even tried to go to see it in person. And in the evening, the city is filled with drunks who use the holiday (and every other holiday) as an excuse to binge drink. So I just stay home on Bastille Day. It’s a day off work, which is all that matters.