Late last month, France put a new law into effect that requires a person to be at least 18 before he or she can buy or be served alcohol. The limit used to be 16 in certain cases.

It pretty much passed me by because I'm over 18 and I don't do drugs (not even ethanol). I'm sure it disappoints some people (those who are under 18 and do ethanol) and rejoices others (those who are over 18 and do ethanol, and don't like to practice what they preach). Of course, in France, practically everyone drinks, and they don't usually wait until age 18 to start. French people go directly from breastmilk to alcohol and coffee. Cow's milk is for cooking, not drinking. The logic is that milk is for babies. But if one follows that logic, for which species are alcohol and coffee intended?

The new law also specifies that businesses may ask for ID before selling or serving alcohol. I'm sure that will be more honored in the breach than in the observance. I've never seen anyone carded in France (granted, I don't often go to places that are dedicated to serving alcohol). Even McDonald's and Disneyland serve booze in France.

Today was the last day of the summer season of the Fête des Tuileries, as I mentioned before, so no more tasty Greek sandwiches for another few months (they return over the Christmas holidays). That place served booze, too, of course—in fact, it didn't serve any drinks except alcoholic drinks! I always went to a stand next door to buy a soft drink to go with the sandwich and fries. Unfortunately, it cost $14, which is about $13 more than I can afford to spend on meals right now. For the moment, meals consist of pound cake, or some pieces of bacon, with milk or (occasionally) caffeine-free Coke.

The heat comes and goes. The evenings are cool but the days are hot. Overall it's still unseasonably warm and dry. I keep hoping this streak of bad (for me) weather will break, but no sign of that yet.

Apparently Paris Plage has been a big success this year. The success of the event each year depends a lot on the weather. If it's not hot, people don't go there as much, and if it's way too hot (as it is right now), people don't go, either, but if it's in between (in the 90s Fahrenheit, as it has been in recent days), they seem to flock to the event. 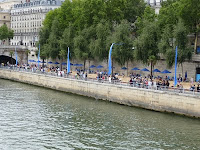 It has been on my list, but I haven't had the energy to visit this year. Most days have been too hot. My threshold of tolerance for heat is low, after years spent suffering in the hellish desert conditions of the Great American Southwest. Eventually, everyone will be like me, as the planet continues to heat up; but right now people in formerly cool regions like Paris are like the proverbial frogs [no pun intended] in a saucepan filled with water on the stove, blissfully unaware that the water is gradually heating up. When it's hot, all I want to do is find air conditioning. I've sweat enough to fill Lake Mead in my lifetime, and I'm tired of it.

Anyway, what I'm missing slightly more is the Fête des Tuileries—the small fair that runs twice a year next to the Louvre—which I've only visited once or twice this summer. I don't ride the rides, but I do eat the junk food, and I especially like the simple Greek sandwiches sold by one regular attendee at the fair. Mmm, I like those sandwiches, complete with an equally simple box of french fries. But heat and poverty have kept me away (a sandwich, fries, and Coke cost €10).

Paris Plage closes tomorrow, so that the expressway it occupies can be back in service by Monday morning. The Fête des Tuileries closes on Sunday.

For some days now, blazing heat has been the rule again in Paris—yet another “heat wave,” or so it is considered officially, even though heat waves are now more common than “normal,” seasonal temperatures.

It got up to 102° F outside my window, which means it was about 110° F on the street. The “normal” yearly maximum temperature for Paris is 76° F, so it's about 30° above normal, again. There's also a pollution alert in effect, as there almost always is when extreme heat traps pollutants in the Parisian air—today was a 6, out of 10 (10 being the worst).

My ancient air conditioner struggled continuously throughout the day, but could not get the temperature inside the apartment below 81° F. Still, that was 25° or so cooler than outside, and every little bit helps.

I learned this evening that some American film is being shot almost literally outside my door (actually a street or two away). The talent includes Leonardo DiCaprio, whose name I recognize (I saw him in Titanic and The Aviator), plus some other actress named Ellen-something. However, there are location shoots every day in Paris—it's like Los Angeles in that respect—so it's nothing worth seeing … particularly at 110°.

I take a keen interest in the technical aspects of cinema (and just about everything else technical in the world), but I've never been a fan of people. If I happen across a location shoot and the equipment looks interesting, I may pause and watch (if the weather isn't too hot!), but I often miss or don't recognize the talent. You can see famous people a lot in Paris, anyway, if you're looking for them. There isn't anyone worth seeing in 110° heat, however, and I pity the cast and crew working in today's hellish, disquietingly freaky weather.

Tomorrow I actually have three hours of work, for which I'll be paid €36 before taxes. That'll make 13.5 hours (€162) of work so far this month, which is slightly more than my bimonthly electric bill. (If you are wondering why my electric bill is €80 a month for a one-room studio … well, I wonder why it's so high, too! I guess EDF has to make fat profits for its shareholders.)

Technology in Paris, firefighters, and pharmacies

Although the major attractions of Paris mostly depend on history and tradition rather than the cutting edge of technology, the fact that Paris is a major world capital means that it still gets some technological innovations before anyone else on the block (at least in the European neighborhood, and sometimes even in the world).

I saw a tiny example of this while waiting in line at McDonald's on the Champs (the busiest restaurant in France). There was the usual array of flat-panel displays above the counter hawking all sorts of McDonald's stuff, but I noticed that one of the displays in the middle was in three dimensions. Intrigued, I shifted from side to side and confirmed my suspicion: the display was designed like certain novelty postcards, using an old technique for 3-D that consists of having tiny linear lenses on the screen that make only one of two images visible depending on your point of view. When you stand just right, one eye sees a slightly different image from the other eye, making 3-D display possible.

I found this interesting, but the novelty of the effect lasted only for about thirty seconds, which was barely five percent of the time I spent waiting in line. And I don't actually remember what the display was advertising, so it would seem that the 3-D effect did not make the advertising any more effective.

I've seen other minor examples of high-tech here and there. One of the designers in the Avenue Montaigne (where many high-fashion designers have their flagship stores) is using LCD panels to alternately hide and reveal the contents of store windows. Ho-hum. Of course we have our high-tech sanisettes, which are both modern and practical. The City of Paris also spends a lot of money on highly customized vehicles for various purposes. The street and sidewalk cleaning equipment is very modern and carefully chosen for the job. Fire and paramedic trucks, which at first glance look like ordinary vans, are in fact custom-designed for the fire department and contain a great many special features that make them highly adapted to Paris.

In fact, Paris firefighters are world-famous. Their helmets are very distinctive, with a very glossy metallic finish, and a very cool reflective visor that matches the helmet. They aren't designed this way just to look cool, however: the reflective finish and the reflective visor help shield firefighters against radiant heat. Their vehicles are also very specialized, as I've indicated. They have to be, because the tiny streets of Paris won't necessarily accept more conventional equipment. Ladder trucks, for example, are especially compact so that they can fit down smaller streets without too much trouble.

Speaking of ladder trucks … you'd think that they'd be used mainly for fighting fires, and they are certainly used for that. But they have another important use: getting people out of apartments. See, Parisians tend to put a zillion locks on their apartment doors, so much so that even a locksmith may not be able to get into the apartment, much less firefighters. If they get a call about someone possibly ill inside an apartment, they don't just bust the door down. Instead, they pull a ladder truck up to the outside of the building, extend the ladder to the outside window of the apartment, and go in that way. It's easier to get in and it doesn't require chopping a door down.

This sort of thing happens more often than you'd expect. Many Parisians live alone in their small, well-barricaded apartments. French people live a long time, and French old ladies live an especially long time. Sometimes old ladies (or other people) expire silently in their apartments, and only the smell or a long period of inactivity clue anyone in to their deaths. The fire department then comes, enters the apartment through a window, and checks to see if the inhabitant is alive. Often she (or he) isn't. I've seen this happen on many occasions, although I haven't waited to see if the person being checked on was dead or alive.

Speaking of elderly French ladies, I went to a pharmacy not long ago to top off my stock of aspirin, and I was struck once again by the vast number of people filling vast numbers of prescriptions. The woman in front of me looked to be in her early thirties, and yet she had a stack of prescriptions to fill … and she wasn't really an exception to the rule. People of all ages are taking all sorts of medications; the French seem to love medication. Apparently France is one of the world's leading markets for Valium, and standing in line at the pharmacy while each person fills half a dozen prescriptions, I had no trouble believing this. I was tempted to step closer and see exactly what this relatively young woman was buying, but I was too polite to do that. I wonder how many mood-altering medications were on her list.

For people with a very long life expectancy statistically, France sure seems to embrace heavy medication early in life. I doubt that the medication improves the life expectancy, but perhaps they find a lifetime on Prozac less stressful (?).