The wonderfully cool weather (with pretty clouds—see my picture at right) of last week has given way to blistering heat again. The heat waves outnumber and outlast the cold snaps by a substantial margin. It's difficult to do much of anything when it's 95° F outside on the street (the “official” temperature is always lower, but it isn't measured on actual streets where real people walk).

I've had to turn on my rickety A/C, which doesn't work very well but is better than nothing. I thought of getting a fan to draw cooler air through the apartment in the middle of the night, but I can't afford a fan (the cheapest I've seen is €20, which is more than I can afford).

I notice that when the sun is out and there are no clouds, the temperature rises consistently by about 4° F each day. If nothing interrupts this progression, there seems to be no obvious limit to how hot it can get, which makes it possible for Paris to beat places like Las Vegas in temperature in some cases. And yet Paris is actually north of Montreal. I've heard it said that if the Gulf Stream stopped, it would lower temperatures in Western Europe by several degrees; perhaps that would be a good thing for Paris, where temperatures have risen by more than a few degrees in just the past decade or two. The historically “normal” temperatures for the city are often 15° F below the real-world temperatures of the city these days.

For several thousand years, Paris has had a cool climate. Why did it suddenly become hot only a short time after I moved here? It's like hot weather follows me around like a curse. No matter where I go, I find myself listening to air-conditioning units running.

I know that I have trillions of fans assiduously following my superlative Paris blog, and I'd hate to have them slit their wrists in depression simply because I've not posted often enough recently, so I suppose I should provide a general update of sorts, on various subjects.

The weather has been good and bad over the past few weeks. “Good” in my book means cool and cloudy; “bad” means sunny and hot. (This is the opposite of what most people prefer, but I was born and raised in a hellish desert climate, and I have no desire to return to that experience.) Some weeks have been well below average in temperature, and I've been (relatively) happy. Other weeks have been very hot, and I've been unhappy. Right now a new heat wave has started, so the weather is depressing me. 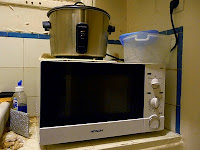 My tiny microwave broke, after long years of loyal service. Although microwaves are cheap these days, they were still beyond my budget, so my parents sent me money to buy a new one (my parents regularly save me from starvation with handouts, since my employer's abusive policies prevent anyone from earning a decent wage). I got a very cheap one that lacks the features the old one had, but I never used any of the features on the old one other than the timer, so I haven't really lost anything. I got the microwave at Darty, a very popular appliance store that is very good with customer service (making it an extremely rare exception to the French rule). That's where I've bought all my appliances over the years, since my experiences with them have always been positive.

The replacement of the microwave meant I could heat things again, so I've been able to eat warm rice and dehydrated apples, plus milk, which are about all the food budget allows these days.

Last weekend, there was a Major Media Event on the Champs, during which all sorts of plants were planted right on the street for Sunday and Monday (which was a holiday). Had the temperature not been at the level of a blast furnace, I might have gone to visit this event, but I can't stand to go outside in hot weather. The temperatures were in the 90s (Fahrenheit) on the street.

Earlier in May I missed the Paris City Fair (Foire de Paris), one of the two largest expositions to come to Paris each year (the other being the International Agricultural Show, which I also missed). No budget, and no time, as usual. It's unfortunate because this fair is often pretty interesting, especially the home-improvement sections (of which there are many), with their fully-built model kitchens and gadgets and other things. Come to think of it, I haven't been to either of these shows in years. Time passes quickly. 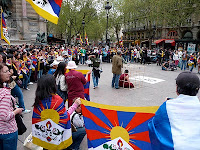 While walking across town to buy some curry paste for rice (the Métro is also beyond my budget these days) on a somewhat cooler day, I encountered not one but two demonstrations in the Latin Quarter and next to Notre-Dame. Living in Paris rapidly inures one to demonstrations, so I didn't even really take note of what they were about, but tourists were snapping away with their pocket cameras—which I suppose doesn't necessarily mean that they knew what the demonstrations were about, either.

Lately there has been much talk in France about banning the burqa (a garment that entirely conceals a woman, including her eyes) in public. I believe some legislation has been passed to this effect but I don't know its current status. I don't favor laws that impose dress codes on people on public right-of-way, even though the burqa is closely associated with oppression of women in some countries. If a woman really does want to be treated as property by her husband, and chooses to wear this exceptionally bizarre (by Western standards) garment, that is her prerogative. I do agree, however, that the garment should be removed to make the face and head visible when necessary for identification purposes (and that includes when driving).

Hardly anyone actually wears burqas in France, anyway. The estimates I've seen are around 1000 women for the whole country. Often they are either trying to advertise their religious beliefs, or they are simply tourists from countries where this attire is normal (and often required) for women. Black seems to be the favored color, which makes me wonder how women dressed like this in places like Saudi Arabia are able to avoid heat stroke (I note that the men dress in white, which makes perfect sense, so I wonder why the women would dress in black, which seems a bit morbid in attention to being conducive to heat prostration).

There are a lot of women who wear scarves in France, and do so because of Muslim beliefs, not because of fashion. The more elaborate the head or body covering, the more a woman is trying to advertise her beliefs. It's not really any different from a Christian woman wearing a gigantic crucifix on a chain around her neck to “witness” her devotion to Jesus, or a Hasidic Jewish man carefully dressing in order to satisfy every detail of the myriad requirements for attire imposed by Judaism. Part of it may be pure religious devotion, but part of it also tends to be advertising.

Anyway, not much else to report from the City of Light for the moment. High season for tourism is in full swing, and tourists are everywhere; even in a depression, Paris leads the way as a tourist destination. And I've been trying to sell things on eBay, but I'm running low on possessions. I've been wondering if I could get anything for books or a couple of DVDs—although the eBay store doesn't like to sell anything that is worth less than 30 euro.