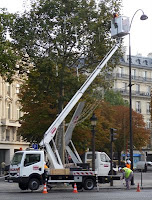 A few days ago I noticed workmen stringing electrical cables in the trees along the Champs. For a moment, I thought they might be preparing to put up Christmas lights, but then I thought to myself nah! It's way too early!

Turns out my first impression was correct. The Christmas lights are actually being installed right now, even though we are still in the month of September. I don't know if that means they plan to light them earlier, or what. Usually they turn them on sometime in November, which is already pretty early.

The current batch of lights is based on bluish-white LEDs, which make a very nice, sharp, sparkling impression when strung in the trees. Some of the lights are animated light chasers that make it look as though snow is falling; the effect is pretty convincing. They look nicer than the plain white lights that the Champ used to have (although those were still quite nice). Anything is better than the floodlit garbage bags on the trees that some avant-garde artist sold to the city a few years ago—that experiment was not repeated!

Informed sources tell me that GE Lighting has provided the lights for the last several years. An association that represents merchants on the avenue puts out a call for proposals, and they insist that bidders do the lighting for free, in exchange for some vague sort of publicity for the company doing the lighting—even though the association forbids the display of any advertisements. Apparently all the bidders turn them down regularly, except GE. In the past, Osram or Philips or other companies have occasionally taken the bait, but not any more. It costs hundreds of thousands of dollars to light the avenue, and the return on investment is nil, since nothing indicates to passerby that the lights are provided by a particular company.