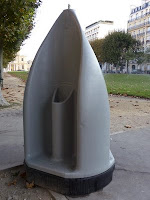 Near the noble chapel of the Hôtel des Invalides today (where Napoléon is entombed), I came across what appears to be a portable urinal of some kind, grouped with other portable toilets. I can only assume that this is a remnant of the visit of Pope What's-His-Name a few days ago.

The design is intriguing. It provides essentially zero privacy … however, given that many French men seem to be no more self-conscious than stray dogs about urinating in public (sometimes they urinate in the same places), I suppose that's to be expected. This urinal has three “stations,” if I may so call them, at which users would be facing each other were it not for a central partition. There's a sort of hole at each station; I presume that the user snuggles up against the partition and tries to aim directly into this hole in order to urinate. (The hole is a fair distance from the base, which might be challenging for boys and extremely short men.) The base of the contraption seems to be a holding reservoir of some kind. There's a gizmo at the top that allows the entire urinal to be hoisted into the air (presumably when not in use) for transport.

It's kind of ingenious, I guess, despite the near-total lack of privacy and the total absence of any provision for washing the hands after use (given how few men wash their hands after using public toilets, I suppose this was considered superfluous).

The strange thing, though, is that it's rather shaped like a cathedral, which I suppose makes it slightly more appropriate for the visit of the Pope. I wonder how close to his august personage this device was placed, if indeed it was used for that event. I note that the urine goes down, towards Hell, while the “spire” of the device points skywards. The design might even inspire a user to gaze heavenwards, once he had carefully located the all-important hole to Hades.

People who live near the Invalides, where one Major Media Event™ took place, say that even residents had a hard time getting into the area while the Pope was lurking about. One wonders who exactly was able to see him in such a case.

Anyway, moving right along … after getting home this evening, while eating my piece of pound cake on my mattress for dinner, I observed a spider scampering across the floor near me. Unfortunately, this scampering act violated the tacit agreement that I've had since time immemorial with my arachnid roommates: to wit, they are to remain in their secret lairs, generally somewhere in the bathroom, and I'm to remain on my own turf, which includes most of the rest of the apartment, except perhaps a corner or two. In return, they may partake of all the insect meals they wish, and I'm untroubled by bugs (unless you count spiders as bugs, but if they stay in their blasted compounds this is not a problem). My encounter with the spider ended tragically for the spider. I trust that she has surviving descendants who will carry on her line (and our agreement).