Lately I've seen Red Bull all over the place. This curious energy drink was originally banned in France, because it contained taurine. I don't know why the government was opposed to taurine. Anyway, early this year, Red Bull developed a formula without taurine and started marketing it in France. A very short time later, the French government legalized taurine, and the original Red Bull invaded the shelves.
France has some weird rules. It outlawed taurine, but now has changed its mind. It still outlaws the sale of medications containing bismuth subsalicylate, the active ingredient in Pepto-Bismol (which is why you can't buy Pepto-Bismol in France). In this last case, it seems that there was a rash of unexplained cases of encephalopathy in the 1970s in France that appeared to be caused by bismuth compounds; the government banned the sale of such compounds, and has regularly renewed the ban.

At the same time, other drugs are freely available, including ethanol, to which about one French person in six is addicted (by some estimates), and nicotine, to which about half the population seems to be addicted. And compounds containing small amounts of codeine are available without a prescription in France, such as certain cough remedies (codeine is an excellent cough suppressant) and some pain relievers (the equivalent of Tylenol II with codeine). 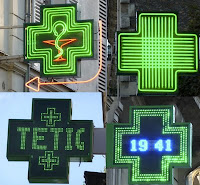 American visitors, who come from a country that takes illicit drugs as if they were candy, often become excited when I tell them that they can buy products containing codeine over the counter. They always seem to be looking for a way to get high. Unfortunately for them, the amount of codeine in over-the-counter remedies available in France is so low that it's almost impossible to get any mood-altering effect out of them without taking an amount that will result in toxicity from other ingredients. For example, to get high on pain relievers with codeine, a person would have to take so much that the acetaminophen in the medication would damage his liver. Thus, France correctly reasons that there is no serious risk of abuse with low doses of codeine in OTC combined medications. The only problem is that such low doses don't necessarily have much therapeutic effect, either, but presumably they help a little, and they don't hurt.

All medications in France come from pharmacies, even over-the-counter remedies that require no prescription. You cannot go into a supermarket and buy aspirin in France; you must go to a pharmacy. Pharmacies thus have a very lucrative monopoly, and since the number of pharmacies is also regulated as a function of population, competition is guaranteed to be low. And French people adore prescription meds just as much as Americans do—France is a very important market for drugs such as Valium and Prozac. When you enter a pharmacy, you often see little old ladies (the life expectancy in France is very long) at the counter with stacks of prescriptions for dozens of medications. In addition to the usual packaged forms familiar to Americans (pills, capsules, etc.), French drugs sometimes come in glass ampules that must be broken open (I guess that seems more magic and wonderful), and the French also like to package medications as suppositories, which I think is part of a more general anal preoccupation that is part of the culture (ick!).

Pharmacies are easy to find in Paris, as they seem to be on every street and invariably have a big green cross marking their location. The green crosses are usually lit and come in a seemingly endless variety of styles. The older ones just have green or blue neon flashing inside them, but new ones use green LEDs to display all sorts of flashing, abstract graphics, not to mention handy announcements on special offers, time and temperature, humidity and air pressure, geomagnetic activity, sun spots, and so on (okay, I exaggerate, but it does get pretty weird at times). I think all these electric green crosses must come from some giant Electric Green Cross catalog; pharmacies seem to compete to see who can have the biggest, brightest, and flashiest green cross outside.

In addition to drugs, over which pharmacies have a monopoly, they also sell all sorts of other health-related goods that can also be found elsewhere. The pharmacy prices are usually higher. And they sell products of questionable efficacy, including various diet aids, electronic muscle exercisers, vitamin blends, health candies and bars, and so on. The principle seems to be that as long as something doesn't actually hurt anyone, it can be sold, even if its effectiveness for its stated purpose remains unproven. These peripheral products are often advertised with elaborate displays in the windows of the pharmacy.

All pharmacies have to have an actual pharmacist running them, and they are not a part of other stores, although some are physically located in other stores (such as the drugstores on the Champs) for convenience. These pharmacists are very extensively trained. Not only are they good at recommending medications for specific purposes, but they can also identify mushrooms (because many French people like to gather wild mushrooms for the kitchen and need a way to weed out the dangerous ones) and fix minor injuries, like cuts and bruises. If you ask for something for, say, a cough, the pharmacist will immediately pull something off a shelf and suggest it, and may well continue to pull other things off the shelves until there's a little pile of different medications on the counter. He or she may also ask questions to determine exactly which product to recommend, and the pharmacist will be well informed on interactions, side effects, and dosage.

Pharmacies also sell veterinary medication for your kitty or puppy. It makes sense, since they are already handling medication for people, and a lot of pharmaceutical science is common to all species. They are also the source of things like vaccines—if you need a tetanus shot, you can get the vaccine itself at the pharmacy (with a prescription) and then have a qualified doctor or nurse give you the actual shot.

I've not been able to determine whether pharmacists may legally dispense prescription medications without an actual prescription, but I've seen it happen, so there must at least be a certain official tolerance of the practice in some cases. For example, if someone needs a certain prescription medication, like something for hypertension or some other drug with low abuse potential, and it's obvious that the person is a legitimate user of the medication who just doesn't happen to have the prescription handy, the pharmacist may sell it to him, anyway. Of course, if someone comes in asking for a thousand hydrocodone tablets and claims that his dog ate the prescription, he's going to leave empty-handed.

One way to tell if you're in a part of town occasionally frequented by drug addicts is to look at the ground around the entrance to a pharmacy. If you see lots of empty green boxes of Neo-Codion, you know that druggies occasionally pass through the area. Neo-Codion is an excellent cough suppressant available OTC that happens to contain some codeine, and opioid addicts who are in withdrawal will sometimes buy it to take the edge off their symptoms, downing an entire box of tablets or an entire bottle of syrup. It still won't relieve them of the need for a fix, but apparently it makes the wait somewhat less agonizing. Pharmacies won't sell codeine-containing products for this purpose, but there's a limit to how much they can do to control how people use the products once they are legitimately purchased—addicts may go from one pharmacy to another, buying a little bit at each of them.