France Télécom is still shafting me on my Internet connection, with speeds so low that I'm roughly in the same position as someone with an analog telephone modem from the 1980's. As a result, it's hard to upload posts and photos, but I do what I can.
Anyway, today, while going to the laundromat, I observed the aftermath of an accident near where I live. From what I could tell, a car had taken a left turn a little too sharply and had hit the small concrete median on which the traffic lights were mounted with the left front tire, and had flipped onto its side. I could only see the bottom of the car as it rested on its right side from where I was, but I presume the driver and any passengers had already left the car, as the police were milling about and there didn't seem to be any concern about injuries. I didn't have my camera with me (exceptionally), so I couldn't take a picture.

Oddly enough, this isn't the first time I've seen this type of accident. I saw the very same thing a few years ago at a different intersection, only I actually saw it happen. It was rather bizarre to see the car bang against the median and roll up onto its side. The driver simply climbed out. In both of these accidents, I've not lingered long enough to see how they get the car back upright. Just pushing it back wouldn't necessarily work, since it might hit the median again or the traffic light support.

People drive small, light cars in Paris, cars that easily flip in this way if they hit something on a turn. Indeed, the most popular car in Paris appears to be the Mercedes Smart car, an incredibly tiny little car that is greatly favored by Parisians because it can park just about anywhere, and parking is the worst part of driving in Paris. These Smarts are so small that they can park perpendicularly to the curb in some cases and still fit. They also don't use much fuel (gasoline is $8 per gallon in Paris). Unfortunately, being Mercedes cars, their prices are not as small as their size would suggest, but I suppose there is economy in operating them. They are very cute. 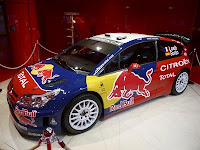 Walking along the Champs a few days ago, I stopped in some of the flagship stores of major auto manufacturers. Several of them have exposition showrooms on the avenue, and some of these are coupled with restaurants, so that you can eat overpriced and mediocre food and admire the automobiles at the same time. At one time, you could even buy a new car in these places, too, but I think the actual dealerships have moved out.

The main manufacturers present on the avenue these days are Citroën, Renault, Toyota, and Peugeot. Citroën has the wildest exhibition space, recently completed after a very long period of construction. It features cars on rotating platforms, one above the other, several stories high. I haven't figured out how they get the cars onto the platforms, as there are no obvious ramps or elevators, and the platforms are so numerous and high that I don't see how they could all be lowered to the ground. It makes one a bit dizzy, in any case. There are rally and Formula 1 cars on display, plus a concept car, plus recent car models, plus an old 2CV, once the mainstay of automobile travel in France. The decor is a garish red and white. I didn't see any sign of a restaurant. The same location once held a more conventional showroom (relatively speaking) with a Hippo restaurant (Hippo is a chain of restaurants specializing in beef and waitresses in short skirts).

Renault has a showroom across the street, with a restaurant on platforms suspended above the cars on display. They have recent models, plus some F1 and other racing cars, all in mint condition, of course, along with a very early Renault model. At one time, they had a museum with a retrospective display of many early models, but that seems to be gone now, or I missed it. They place a lot of emphasis on Formula 1, and they have toys and key chains and scale models to sell. I've eaten here in the past; it was not a memorable experience apart from the high price.

Not to be outdone, Toyota has a showroom as well, with a restaurant on the upper floor that I haven't tried (Japanese cuisine, apparently). They have a lot of concept cars on the ground floor. The current concept car looks like an unbaked loaf of bread, with little jet engine exhausts, early Batman style, in the back (not visible in my photo). The decor is relentlessly white. There's an almost-obligatory F1 car on the upper floor.

Finally, Peugeot has a showroom up the street, which I didn't visit on this occasion. It might still have a dealership inside, but I think all the dealerships have been moved out now. I almost bought a Peugeot 206 there, years ago, after I got my French license, but I settled on a cheaper and nicer Renault Clio instead. (I don't have any car at all these days.)

You'd think that with the world's finest mass-transit system, Parisians wouldn't need cars—and indeed, about 80% of Parisians don't even have a license, much less a car. However, someone is still buying and driving cars in the city, including an ever-increasing number of totally useless and wasteful SUVs. The current mayor's vigorous attempts to discourage driving (adding more bicycle and bus lanes and reducing lanes for private cars dramatically) don't seem to have much effect.

I must admit that I'm not really interested in cars most of the time. I never went through that car-adoring phase that seems to afflict many boys sometime after puberty. Cars are just transportation, most of the time, although I suppose some of them are more fun to drive than others. My attitude is more typical of the average female consumer than the average male consumer … that is, I care mostly about fuel economy, reliability, and total cost of ownership. I don't even care about the color, usually; whatever is in stock is fine.