It has been somewhat more than a year since the semi-free, automated bicycle rental system known as Vélib' (pronounced "vay-leeb") was first installed in Paris, and the program has been a tremendous success. It doesn't seem to have made much of a dent in motor-vehicle traffic, but the bicycles provided by the system are everywhere. 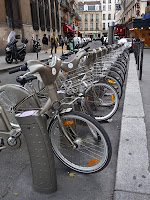 The idea is straightforward: At nearly two thousand locations around the city, there are rows of custom-made bicycles attached to computerized posts. You pick a bicycle, wave a card at the post to which it is attached, and ride away with it. The first half-hour is free, then every half hour thereafter is billed at an increasing rate (to discourage people from keeping the bicycles for long periods).

I see people riding these bicycles all the time, day and night. Paris has a fair system of bike paths within the city, although sharing a bike path with a bus lane (as is often the case) doesn't reassure me. I used to ride a bike occasionally in the city, but the stress of dealing with traffic, the lack of continuity in the bike paths, and the poor quality of some road surfaces (ever try to ride a bike on wet cobblestones?) discouraged me.

These bikes are extensively vandal-proofed, and they are very heavy in consequence: they weigh about 50 pounds. Even so, many are broken by antisocial louts, and quite a few have disappeared (supposedly they've been spotted as far away as Casablanca). Some people question whether the system will survive for the long term; it's too early to say. For now, at least, they are doing well.

The system is operated by JC Decaux, the same company that has similar monopolies on certain street advertisements, Sanisettes (those self-cleaning toilets one sees on Paris streets), bus stops, and so on. They seem to get all sorts of juicy contracts. This contract requires that they operate the Vélib' system for free in exchange for the ability to put up advertising around the city (whereas the deal for Sanisettes requires that the city pay the company for all operation and maintenance of the toilets). The company also monitors who has used the bicycles and where for a period of two years, which somehow got past the French privacy laws.

I have never used the system personally, since I don't have any of the resources required for it (checks, credit cards, etc.). In today's world, if you don't have a credit card, you're a second-class citizen, which ironically means that the people who might profit most from free bicycles are not allowed to rent them. Interestingly enough, France is even more into credit cards than the USA in many respects, so the have/have-not contrast is even sharper here.