One of the most common sights in Paris is the galvanized steel barricade, even though they aren't mentioned in tourist guides. You run into them (no pun intended) everywhere in the city, and they magically move from place to place from one day to another. 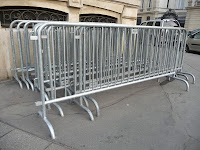 The barricades are portable, and look to be a meter or so in height and perhaps three meters long. They can be linked together to form chains of substantial length. To link them, you rotate one of the barricades through a precise angle, then slip a hook on that barricade into a loop on another. Since they must be rotated to be separated, this keeps the barricades secure when they are connected in long chains, because you can't really rotate the ones in the middle of the chain, only the ones on the ends. Quite clever, I think, albeit rather irritating if you are confronted with a long line of them and you need to get past them (of course, that's the whole idea).

They are easy to climb over and are not intended for control of angry crowds, but they work well for crowds that are behaving. Sometimes they are arranged in two parallel rows, with “ribs” made from individual barricades separated the two rows, to form a kind of no-man's-land between the two rows. I suppose the idea is that anyone trying to cross the barricades can be shot more easily while he's in the space in-between.

When major events are held in town (that is to say, about every other day), you can easily understand the purpose of a string of barricades along a street. For example, you see rows of them on the Champs during the Tour de France bicycle race, since the last leg of the race ends there and crowds are heavy. But in other cases their placement is mystifying. You might see three disconnected barricades on a sidewalk, and nothing else. One has to wonder why they are there.

The City of Paris seems to have roughly 1,492,876,135 barricades in place at any one time. When they are not in use, presumably they are stored in a warehouse the size of Vermont somewhere outside the city. Some of them belong to the city's police headquarters; others belong to the Ministry of the Interior (which controls police forces in the country). They are often marked to identify the owners—the ones in my photo belong to police headquarters, as the small PP logo indicates. The ones in this photo were just sitting on a street corner. Nobody steals them (who would steal a barricade?).

I've seen unmarked trucks placing and removing barricades on many occasions, although I can't always figure out why they are doing it. One day a street near you will be crowded with barricades, and the next day they'll be gone. They are a nuisance, like pigeons, only they don't move under their own power (I think).

A popular spot for barricades is in front of schools (to keep wild mass murderers out, I suppose) and embassies (to keep wild terrorists out, I suppose). Indeed, by counting the barricades in front of an embassy, you can find out how important and/or despised a country is … the U.S. and Israeli embassies are always at the top of the list. I noticed, for instance, that barricades in front of the Chinese embassy multiplied at the start of this year's Olympics, but then thinned out again after the first day. And many embassies have no barricades at all. Sometimes I get the impression that barricades add prestige to an embassy, since countries that are not important tend not to have any enemies.

I've become so accustomed to barricades that I don't notice them much any more, but I remember being struck by their near ubiquity when I first came to Paris. Paris is a major European and world capital, and the French are fond of mass demonstrations as well, so it's not hard to understand why barricades are so common.