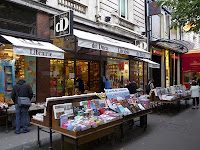 I finished work early and actually had time to go for a walk recently, and went up by the Opera—the old Opera, the Opera Garnier, not the newer Opera Bastille.
The area around the Opera Garnier (the opera that served as the setting for the fictional Phantom of the Opera) is quite lively. There's lots of shopping, lots of places to eat, and to the east, lots of movie theaters and some other attractions. I wandered around for a few hours on the way home. I don't often have time to walk anywhere these days, so it was a refreshing change.

I didn't have much money so I couldn't do anything, but I did splurge and buy an éclair from chichi Fauchon near the Madeleine. French people judge people heavily based on appearance, and I always sense a certain apprehension in the staff when I walk in and they see me in my standard attire (at this time of year, hiking shorts and boots, and my all-purpose utility vest). They relax just a little bit when I actually buy something, since this strongly implies that I'm not a terrorist or a bum. In this case, I was charged too much for the éclair (prices had gone up and the tag had not been changed), so they gave me a second éclair for free. Both éclairs were “Mona Lisa” éclairs, filled with chocolate and nuts and some other stuff, and topped with an edible picture of the Mona Lisa. They were messy but good, albeit not quite good enough to justify their price. 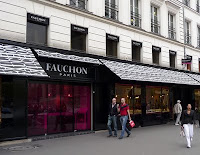 I walked around the entire area in kind of a random way (Paris is a city ideally suited to random walks—there's something interesting on every street), looking at the foot traffic among all the stores and peeking into store windows. Eventually I converged on the area east of the Opera, along the boulevard des Italiens and the boulevard Montmartre. There are tons of restaurants, shops, cinemas, and other attractions on these streets, although restaurants are the majority tenants. And it's not all French, alas! There are quite a few Italian restaurants, several Starbucks (including one fabulous Starbucks that is a palatial, converted bank lobby), a couple of McDonalds, a Pizza Hut, the Paris edition of the Hard Rock Café, and many other places that don't necessarily match the Gallic stereotype.

Like most major streets in Paris, this one has people on it day and night. There's much to see, so walking slowly is a good idea. There are many small, permanent shops selling all sorts of things (clothing, books, records), along with stands on the street selling still other things (cheap jewelry, crêpes, candy, popcorn, etc.). Anyone who is hungry will find his favorite food somewhere on this street. Although theme restaurants aren't big in France (the T.G.I. Fridays that used to be on this street went out of business), there are still specialty restaurants around here, including one place that sells only baked potatoes, another that sells only a few varieties of pasta, and so on. The Grévin wax museum is here, as well as several old, covered shopping galeries with unique and interesting shops inside. This is where you find the aforementioned Hard Rock Café (pretty good food, but the music is sometimes intolerably loud during concerts). There's a vast Monoprix supermarket with an impressive entrance, although that location is one of those semi-jinxed locations that go through many tenants over the years. Anyway, overall, the place has atmosphere. 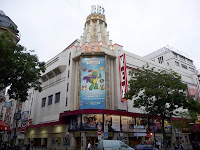 There are cinemas, too, although they were quiet as I walked past in the afternoon. At night, lines form outside the cinemas. Many still have decent-sized screens, and a few are well known for this, such as the Max Linder Panorama (where I once saw 2001: A Space Odyssey from the balcony during a Stanley Kubrick festival), and especially the huge Rex, a cinema in the classic style with a massive screen. The Rex hosts many premières, including those of most Disney films, and it has provisions for stage shows. It is so well known that you can tour the theater as an attraction in its own right. There's also a discothèque below it.

If you go far enough east on the boulevard Montmartre, onto the boulevard de Bonne Nouvelle, the restaurants and cinemas thin out, the stores get a bit less chic, and eventually you end up at a huge stone arch that marks the intersection with the wicked rue Saint Denis. Centuries ago, this narrow street regularly hosted royal processions, but today it is known best for its ethnic groceries and discount telephone stores to the north, and its prostitutes and sex shops to the south. The latter has been greatly tidied up, in the sense that the street itself has been fully renovated, along with streets around it. The prostitutes are still there in small numbers; they are more obvious here than in most other parts of the city, standing around in doorways, but they are not obnoxious. Coincidentally, this is part of the garment district, so the storefronts around them are often wholesale distributors for various kinds of clothing, including fashionable stuff that ends up being sold at high prices when it finally arrives on racks here and abroad.

I turned south on the rue Saint Denis and went through prostitute-land to reach bar-land, the area around the Forum des Halles which again is very lively with tons of restaurants. By then it was getting late and I was short on time, so I hopped on the Métro to go home (fortunately I had purchased a pass before I ran out of money).

Walking around like this reminded me of the good old days when I was able to walk for several hours a day in the city. Overall, I've walked some 30,000 miles in Paris over the years I've lived here (yes, that's really 30,000 miles—it's not a typo).