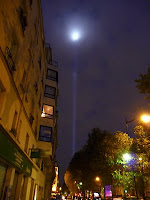 Today marks the tenth anniversary of Pari-Roller, an association that has been organizing weekly rollerblade rallies in the city since 1994. They start from Montparnasse every Friday night at around 10 PM. There might be 15,000 people on rollerblades on a given evening. They skate around until 1 AM.

For the tenth anniversary they had some sort of event. I didn't check it out in detail because I was waiting for a take-out pizza to be ready, but they had a stage set up with someone bellowing into a microphone in the standard way that one sees at such events.

The only unusual thing they did (and the thing that drew my attention to the event) was to set up a big circle of carbon-arc searchlights and point them directly up, creating a shaft of blue light that impinged on the low clouds over the city. I saw that from afar (it was visible from everywhere) and suspected it might be coming from Montparnasse, and I was right; I even guessed it might have something to do with rollerblading, and it did. There aren't a lot of other major events that take place at Montparnasse on Friday nights at 10 PM (although the area is quite lively overall until very late at night).

This roller-rally is one of the many nice things about Paris, although I'm sure it's not the only large city to hold such rallies. It is well organized so that traffic is stopped as the rollerbladers pass.

Unfortunately it's hard to take pictures of it, as it takes place at night and there isn't much light. Incidentally, I'm actually capable of taking better pictures than you see in this blog, but tiny digital cameras typically have no provision for manual override of many critical parameters, which means that you get whatever the camera is willing to take and cannot adjust things like shutter speed or aperture. Usually you don't have much control over focus, either.

The pizza was a good deal, since it was a two-for-one offer and for only a couple euro per meal I can eat for two days or so (two 2-person pizzas is about four meals, for €15.20). I put the pizza in the fridge. Pizza is one of those things that seems to taste as good or better after being reheated from the refrigerator.