Take-off on the Champs

On the Champs this week, there is a street show extolling the virtues of French aerospace technology. I had three hours free so I walked through this show in the afternoon. It was moderately interesting, although the part of the Champs on which it was set up (the lower part below the roundabout, which is mostly parkland) was very dusty, especially with lots of people walking around the exhibits. 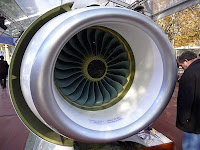 France has a long and impressive history of accomplishments in aerospace, although it doesn't shine quite as much now as it did in the old days. It's still a world leader in this domain, though, and so there was some interesting technology to see. I rather liked the jet-engine displays and the example of A380 landing gear. A lot of the marketing and patriotic stuff I could do without.

As for airplanes, only small aircraft were on display. There was a glider, and there were several small general-aviation single-prop aircraft, plus a few helicopters (trucked in, not flown in), a stealth drone, and two fighter jets (an old Mirage and a new Rafale). There were a lot of Scarebu—er, Airbus displays, too, although I think Airbus works more against the image of France as an aerospace leader than in favor of it.

Several simulators were available to the public to try out. Just my luck that none of them were for aircraft that interested me. There was an Airbus sim, but I prefer airplanes that are flown by the pilots, rather than by PCs. There was a fighter airplane, but I'm not interested in fighter aircraft. And there was an ATR-something, but commuter twin-turboprops don't do anything for me, either. Had they offered a Baron or a Boeing, things would have been different, but I suppose lightning would have struck anything built by Boeing at this show. I'm surprised they admitted that GE participated in the designs of the engines on display. 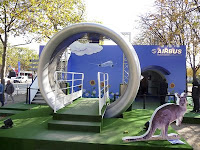 There were two displays of the intake cowling for an A380 engine, which is about 12 feet in diameter on the inside; you could walk through one of them. (The engines on the Boeing 777 are slightly larger, although there are only two of them, whereas the A380 has four.)

There were some displays of old stuff, including the forward section of an old Caravelle, but I mostly like modern aircraft, or at least recently-built versions of older designs.

It was a nice way to spend an hour or two, and the weather in the city was perfect, with mostly sunny skies and fluffy clouds, a breeze, and relatively cool temperatures.