As the Métro becomes ever more crowded at rush hour, I've been trying to find alternative ways of getting to work. “Crowded” is, of course, a relative term, and I've been told by people familiar with subways in other major cities (London, New York) that rush hour on the Paris Métro is tame compared to these other systems, but it still seems very crowded to me. Apart from the sheer difficulty of squeezing into the subway car at the station, there's the high density of airborne pathogens that can infect me with a cold or flu for a week, and I cannot afford to miss work due to infections. 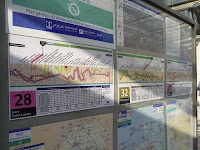 So I've been looking for alternatives and options. One option is to take different lines. The main line from where I live to where I work is absolutely jam packed at rush hour, but another line nearby is much less crowded. Unfortunately, this latter line requires a train change and so is a bit longer in terms of time to get to work. Still, I tend to use it more than the direct line, simply because it's easier to find a train at rush hour with some space that I can fit into (on the direct line, sometimes I have to skip several trains before I find one with space for me).

Another option is walking. I like to walk, and walking for miles is not a problem for me. However, it requires leaving somewhat earlier in order to allow for walking time, and it is vulnerable to weather (it's not fun to walk in a driving rain), and it wears out my clothing more quickly—a single stroll across the city, for example, can wear holes in nice wool dress trousers, although garments intended specifically for hiking will show no signs of wear at all after such a walk. Anyway, these factors limit the practicality of walking, but I do it when I can. I can certainly use the exercise.

Still another option is Vélib’, which I've written about before. Unfortunately, that requires a credit card, which I don't have, or a check, which I also don't have. And it's very difficult to ride a bicycle efficiently dressed in business clothing, at least for me. So that's not very practical right now. 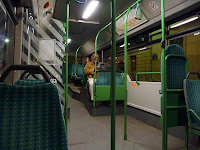 Finally comes the option of city buses. There are nearly four thousand bus stops in the city, ten times the number of Métro stations, and one often can find a bus stop within a hundred feet or so on big city streets. There's a bus stop only a 1-minute walk away from my apartment building, and another only a two- or three-minute walk from my school. I decided this week to try using the bus to get to work.

The bus has advantages and disadvantages. It is often less crowded than the Métro, at least on certain lines (including the lines I use). There are more stops so you can often get closer to your departure and destination points. It's more scenic, if that matters. But it's also slower and far less regular in departure and arrival times. It might take twenty minutes to get somewhere during off hours, but more than an hour during rush hour, due to traffic.

The results of my experiments were mixed. The bus has indeed proven less crowded than the subway, even at rush hour. However, because of traffic, it has been much more irregular in travel times, causing me to be 18 minutes late on one occasion. And the waiting time for a bus to pass can be very long, and it changes at different hours as the buses are released at changing intervals. Still, I will add it to my list of viable transit options and avail myself of the bus when circumstances point to it as the best solution.

Parisian buses are clean and comfortable and pleasant looking inside. Nevertheless, I usually don't recommend them to tourists because they follow extremely convoluted routes through the city, and you have to know exactly where you are and exactly where you wish to go in order to make use of them. If you are traveling more or less randomly through the city (as a tourist might), it takes a long time to figure out which bus(es), if any, can take you from where you are to where you wish to go.

Adding to this is the way in which bus routes are displayed at bus stops and inside buses. The maps are long horizontal strips that graphically show the route of the bus and the stops. However, real-world bus routes don't fit conveniently into a narrow horizontal strip, so the maps used on the strips are highly distorted in order to make the whole route seem roughly horizontal. This means that, if you don't know the layout of the city very well, it can be impossible to figure out exactly where the bus is going and what route it is taking to get there. It can be particularly difficult to figure out how close a stop shown on the map might be to your ultimate destination. I know the city well, like most residents, so I can figure it out, but for visitors it will almost certainly be frustrating to determine exactly where the bus is going from these highly distorted maps (although I do find them rather clever).