Well, the heat wave let up, and today was a very nice day: cool, sunny, with a breeze. Nice April in Paris weather. I was able to go for an enjoyable walk.

I was tempted to try a video of the Luxembourg Gardens. Now that spring is here, everything is green and beautiful. The only problem is the dry weather and the breeze. When it hasn't rained, and there's a stiff breeze, many of the parks in Paris can turn into dust bowls, because the large numbers of people shuffling around on the dirt in the parks (actually finely divided limestone, in most cases) raises a lot of dust. This isn't a problem for people, but when you have optical instruments with you, like cameras or camcorders, it's important to stay away from those dust clouds. 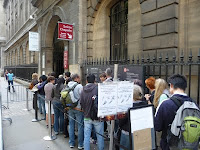 In fact, it's even worse with digital cameras and camcorders. If one speck of dust lands on the image sensor, you get a dark spot in every photo or video, until you disassemble the camera (if that's even possible) and clean the sensor in a dust-free environment. Some recent cameras are built to reduce this problem, but it's hard to avoid entirely. Cameras with interchangeable lenses are even worse, since removing the lens exposes the sensor itself to outside air and dust.

So I was reluctant to go into any parks. I'll wait until after a day or two of rain, then go while the ground is still moist. After a rain the air is cleaner, too, although it wasn't too bad today (the pollution index was quite high, but visually it looked okay).

I did photograph a few other things.

I happened to walk past the Sainte Chapelle, which had its usual line of tourists waiting to get in. The Sainte Chapelle is in the same complex as the national law courts, so security is tight. I noticed that the gendarmes inside no longer keep pointy things for you while you're there. In the old days, they'd take anything pointy (scissors, files, pocket knives) and number them, and give them back when you left. Now a sign says that they just confiscate them. I guess it was too much work to try to keep track of them all.

The line in front of the Sainte Chapelle was long, and ditto for the Conciergerie, but the line for the law courts was empty. Sometimes it's the other way around, especially when gangsters or other “celebrities” are on trial. 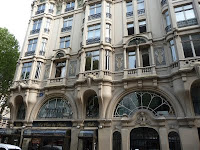 South of that tourist attraction is the Latin Quarter, and for the umpteenth time I walked past the building at 1, rue Danton, which has very unique architecture. It was designed by Émile Arnaud in 1900, and built by engineer François Hennebique. Apart from the interesting style of the building, it was one of the first uses of reinforced concrete, although it certainly doesn't look like a typical concrete building. Unfortunately, in later decades, the style of Le Corbusier took over, what I call the “Hoover Dam” style because that's what his water-stained, soot-covered buildings seem to look like. I prefer Arnaud's style.

Speaking of architecture, I went past the Forum des Halles as well. The shopping center is being redesigned. The old design was kind of ugly, and like so many “modern” styles in aluminum and glass, weathering quickly made it even uglier. The new design looks like a glass trilobite from above, and I suspect it will be at least as ugly at least as fast. But architects in France are always trying to make their mark, and not always successfully. I'm at least thankful that Jean Nouvel wasn't the architect—that would be really scary.

I've put up my video on La Défense. It's lame, as usual, but it does show the plaza and the underground transportation hub. I couldn't afford to license any music for it, so it's just the usual ambient sound.

The Foire de Paris starts tomorrow. I'm debating whether I can afford the €12 ticket to see it, and maybe to take pictures. It's the largest annual exposition in Paris, filling the entire Porte de Versailles exposition center. It concentrates on things for the home, but it's very interesting. We'll see.