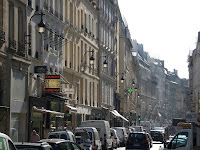 It's April in Paris, and the weather is mostly the way it's supposed to be, except for a heat wave (20° F above normal), but heat waves are becoming the norm these days. Apart from the heat, the sky is blue and sunny, with a slight breeze.

There was some sort of activity outside yesterday making a horrendous racket. There has been construction on my street for what seems like years now, but this was even noisier than usual. It was so loud, in fact, that it was hard for me to hear music inside the house, even with headphones on. I discovered a note today on going outside that said some sort of construction would be done on the 6th that would make a lot of noise. Well, it sure did. I'm used to living with noise, as Paris is a noisy city, but that was ridiculous. Anyway, it's gone now.

Today I went for a walk after class … a long walk. However, I've been on longer walks than this. I must be in poor condition because I had to stop to rest once during the walk, even though I had also stopped to eat a hamburger and fries as well. Careful measurement with Google Maps reveals that I walked 24 kilometers, or about 15 miles. This is well below my record, and normally it should not have affected me, but I felt a bit tired upon arriving home. It was a slow walk, and I was on my feet for about ten hours, so maybe that contributed.

I walked to school, as usual, and then I walked to the Port de l'Arsenal after class, to take some video. From there I walked up the Canal Saint Martin, through the open market (there's an open food market on Thursdays), up along the canal, and finally ended up at the drawbridge just north of the Bassin de la Villette, the artificial 19th century lake through which the canal passes. From there, I walked back home, which literally means walking right across Paris. The nice weather made the time pass quickly. The pollution levels weren't too bad, either, and the air was very clear. 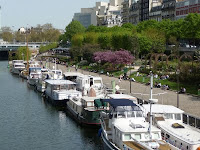 I got some reasonable video, so I'll edit that into something soon. I'm several videos behind in terms of editing, but I'll get it done eventually.

For dinner I had plain white bread with mayonnaise, a favorite (and cheap) snack of mine since childhood. When I was little, it was usually Best Foods mayonnaise, but here in France there are a dozen different kinds of mayonnaise, all of them with more complex tastes than the plain white stuff in the U.S. I picked one that had some sort of spices in it, and it tastes pretty good, as best I can tell (since my sense of smell and taste are both very weak these days).

I had some egg salad, too, which I also made myself a few days ago. I think it probably tastes very good as well, even if I can't really taste or smell it myself.

I still worry about the temperature, though. Today broke a record that had been set in 1896. In fact, the temperature today matched the normal annual high for Paris, which is usually reached in the hottest part of August and amounts to 24° C, or 75° F. If the temperature didn't go past that, that would be fine, but if it's already that hot in April, what will it get up to in August? That's what worries me.

On the way to the Port de l'Arsenal (a small pleasure harbor at the south end of the Canal Saint Martin and the Bastille), I really noticed how clear the air was. Sometimes the pollution becomes so routine that you just assume your eyes aren't what they used to be when everything looks misty. But then a day like this comes along and you realize it wasn't your eyes at all, but just pollution.

I also passed some sort of demonstration by Doctors of the World, an organization that I won't touch with a ten-foot pole. There are two medical NGOs with very similar names, Doctors Without Borders (Médecins Sans Frontières) and Doctors of the World (Médecins du Monde). The first concentrates specifically on medical assistance to the needy in the Third World, the second concerns itself with politics as well as medicine, which is why I avoid it. Doctors of the World was started by a politician who left Doctors without Borders when the organization refused to take a political interest in its activities. I don't like politics, either, so I only donate to Doctors without Borders.