On the way home today, I passed through the Latin Quarter, and walked down some of the streets in the western part of the neighborhood, which are awash in art galleries of all sorts. 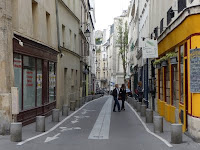 The weather was nice and the streets were peaceful (especially since most people are on vacation for either Easter or Passover), and it was a pleasant walk, but I did find myself wondering how art galleries manage to stay in business. The vast majority of galleries sell modern art, since old art is in limited supply and they're not making any more of it, but most modern art is (at least in my opinion) garbage.

Do people really pay €50,000 for a few splashes of paint on a canvas? I guess people like Jackson Pollack answer that question, but it mystifies me. I suppose it depends a lot on who made the splashes.

I think that many people buy or praise modern art because they're afraid that they'll seem uneducated if they don't. They don't actually see anything in the art, but they're worried that maybe others who praise the art are seeing something that they cannot, and they don't want to seem retarded, so they praise the art, too. It's exactly like the emperor's new clothes. I don't worry about seeming uneducated, though. A lot of modern art is garbage, designed to take advantage of people who worry too much about what others think, and I'm not afraid to call it as I see it. And I'm sure not going to pay €50,000 for garbage. If I want modern art, I'll go outside to the dumpster, pull out some garbage, glue it together, and put it on a marble pedestal in my living room. Nobody will know the difference, and everyone will be afraid to confess that they don't understand the “art.”

If I go to the Louvre (which I confess that I hardly ever do), I see art that I can recognize as art. It's still not that impressive—the mere fact that a painting is 500 years old doesn't make it good—but at least it shows some sort of talent. Old art seems to disproportionately portray a lot of generals, politicians, and saints, most of whom are either nude or dressed in bed sheets, but it's still better than modern art.

At the Orsay Museum, which picks up where the Louvre leaves off, and stops just prior to reaching the abyss of modern art, you can see things that are both artistic and recognizable. Some work of the impressionists is very nice, for example. You can recognize what it is, but it's not photo-realistic. It's a nice balance between the abstract and the concrete. I don't salivate over it the way some people do, but I like a lot of it. I still think Van Gogh looks like he was fingerpainting, though. And while Monet is pleasant as well, there are limits to how many depictions of stagnant ponds covered with lilies and scum that I can see before I need a break.

So do I like anything? Yes. Manet's Olympia is a nice painting, simply because it looks exactly like real life. His model, Victorine Meurent, looks a bit impatient and self-conscious. Of course, that's also why people found it scandalous. How dare a painter try to depict reality!
Jean Ingres did the same thing (minus the nudity, generally), and did a very good job as well. I like his paintings. He did a lot of commissioned work, and his portraits look like real people, which I suppose was exactly what his clients wanted.

Picasso got weird over time and I don't generally like his work. However, there's a museum in Paris that contains a lot of his earlier work, before he got weird, and he was a good painter in the early days. Salvador Dali, who has a small museum of his work in Montmartre, was an excellent artist, although his choice of subjects is a bit nightmarish—like Norman Rockwell with malaria.

Anyway … I've only bought one work of visual non-photographic art in my life, and it was an original cel from a Warner Bros. cartoon (Duck Dodgers in the 25½ Century, as I recall). I pawned it years ago out of poverty.