Île de la Cité, and the importance of bandwidth

I've finished yet another video, my longest yet (seen here). It features a few views of things around the Île de la Cité, the central island in the middle of Paris that is the historical heart of the city. Notre-Dame is the biggest attraction on the island, and I show a bit of that, but I also show some side streets, the flower and bird market, and the Pont Neuf.

I don't show the Sainte-Chapelle because it costs money to go in, and there's a long line, and the security is very tiresome (because the national law courts are in the same complex). Also, in hot weather like this, the inside of the chapel is hot enough to make you pass out. The stained glass is very pretty, though, so sooner or later I guess I'll have to get pictures or video.

The island is kind of nice. There's a very pleasant residential area at the west end, around the place Dauphine, and there's another small residential area at the east end. Both are, of course, unaffordably expensive. The average price of real estate in Paris now is about $1200 per square foot, and the prices on the island are far above average. All those nouveaux riches from the Third World are buying up real estate like it's going out of style, and they don't care how much they have to pay. And Paris is small, so there's only so much real estate to go around. 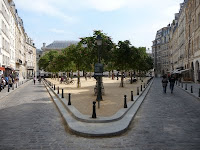 Apart from Notre-Dame, and the Sainte-Chapelle, there's also a flower market, as I've said. The flower market is open every day, but on Sundays it also becomes a bird market, selling both birds and everything that someone with pet birds would need, such as food and cages. The bird market seems to be smaller than it once was, but it's still interesting to see. The flower market is nice because some of the shops are practically jungles of flowers and plants, which I find interesting to walk through (as you'll notice in the video). As always, since this flower market is a few feet off the beaten path of tourists, it only receives about one percent of the traffic.

Indeed, there are lots of spots on the island with no tourists. There are lines outside the Conciergerie (in the same complex as the Sainte-Chapelle) and Notre-Dame, but nobody is walking down the tiny streets nearby. The decline in tourist traffic as you move away from the narrow path defined in the travel guides is as steep as a cliff. In one spot, there are so many tourists that you can barely move; but move twenty feet, and 99% are out of your way. Dare to walk to a different street (even one close and parallel to the touristy street), and there's nobody.

Some of the streets on the island are extremely old, of course, and to some extent this shows, although buildings do tend to be replaced over the centuries. One giveaway is the narrowness of the streets. It seems that the older a street it, the narrower it gets. (The narrowest street in Paris, incidentally, is the rue du Chat-qui-Pêche, in the Latin Quarter, which is so small that you can touch both sides with your outstretched hands.) The place Dauphine is also free of tourists much of the time, even though it features a pretty little park. Another park, the square du Vert-Galant, on the western tip of the island, is beautiful but has far fewer tourists than the area around Notre-Dame. (All of these are in the video.)

Anyway, I think I probably spent four hours or so shooting, for about 90 minutes of raw footage. It took maybe five hours to edit it. But then it took more than three hours to render it, and an incredible eighteen hours to upload it to YouTube!

It's all a problem of bandwidth and horsepower. It takes a lot of computer horsepower to work with video—video editing and rendering are right up there with video games as the top consumers of computer power on the desktop. Everything else pales by comparison. And then there's the issue of getting it from the computer to YouTube, via a broadband connection that is typically 10-30 times slower for uploads than it is for downloads. So uploading 25 minutes of video takes all day. I guess I won't be doing any feature-length videos any time soon. The actual video file, for 25 minutes, was 6 gigabytes in length … an entire DVD in terms of capacity.

Anyway, it's out there now. I got just a tiny bit more inventive for transitions. I have to be careful, though, because the mark of the amateur is the excess use of wild transitions and special effects.