Movies, and the Eiffel Tower

Another movie was being filmed near my house last night. I've become so jaded living in Europe's answer to Hollywood (i.e., Paris) that I didn't even bother to go take a look, although I saw the trucks parked nearby when I went to get some groceries. I don't know what movie was being filmed. 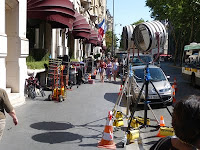 You can walk around Paris on any weekday and see film crews shooting on location. Paris is a popular setting for movies, TV shows, and commercials. I'm quite interested in the technology of cinema, but not as much in the artistic part. For example, I'm interested in cameras and lighting, and editing, and things like that, but I'm not interested in acting, and I'm indifferent to “stars.”

Perhaps one of the most widely talked-about location shots recently was that of Midnight in Paris, a film by Woody Allen. It got into the news because the French president's top-model wife, Carla Bruni, had a part in the film. Allen commented that he had wanted to make the film back in 2006, but that it was “too expensive.” And yet, when he made it in 2010, four years later, it was suddenly affordable? Hmm. It's tempting to see a link between Carla Bruni and the many tedious permits that must be obtained to shoot movies in Paris … but maybe I'm just being cynical, eh?

Anyway, so someone was shooting in my neighborhood, which happens quite often. I guess there's something about this part of town that makes it suitable for shooting—perhaps the fairly nondescript Parisian architecture and little-known streets make it easy for locations here to pass for anywhere. Who knows? But one often sees little pieces of paper taped to poles and doorways warning of an upcoming location shoot, and of the use of parking spaces by trucks. Often I've never heard of the production companies, the director or producer, or any of the actors.

Helpful hint: If there's a really large crew that is mostly idle, you know it's an American production. Americans always have at least one union member (or equivalent) for each task, plus a few dozen other people with no identifiable function. French productions are invariably strapped for cash, so they have smaller, more active crews. 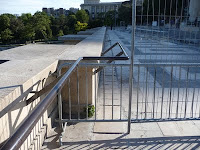 I remember when Jonathan Demme came to Paris with his entourage to shoot The Truth About Charlie (2002), his very inferior remake of Stanley Donen's Charade (1963). They spent hours during the night shooting what would end up as 30 seconds on the screen, on the banks of the Seine River. There was a guy in a boat who just went up and down on the river to keep the water sparkling (at night, after the excursion boats stop, the slow-moving Seine tends to become mirror smooth). I knew it was an American production because French production companies can barely afford film, and that's with the help of dozens of sponsors (all of which are listed along the bottom of French movie posters, making them look like charity telethons).

Anyway, moving right along … while passing through the Trocadéro plaza not long ago on the way home, I noticed that an extra railing is being installed on the edge of the plaza facing the Eiffel Tower. I guess putting in this railing is a safety necessity, since they waited only 70 years to do it. I presume that it's intended to prevent people from climbing onto the low wall at that location to take pictures, but I'm sure they'll just climb around it, so it's a waste of time and money.

The weather is still unseasonably warm, but other than that it has been very nice. Even the pollution levels have been low. But there's a significant drought in progress, and the experts say that spring in Paris this year may prove to be the driest in over 200 years.