Return to the Promenade Plantée

I went back to visit the Promenade Plantée a few days ago, which I haven't visited in ages. It's a strip of parkway on the east side of Paris, built about 25 years ago, along the path of an abandoned railway that used to end near the Bastille. The western end is elevated, the eastern end is below ground level. When I first visited it, long ago, most of the trees along the parkway were freshly planted saplings; today, they've grown quite large, and the parkway is a welcome and refreshing change of scenery from the concrete and asphalt that dominates Paris.

I was inspired to return there by recent references to the parkway among friends and acquaintances. In fact, I decided to make a little video that shows it, which I'm still editing.

It takes 45 minutes to an hour to walk the parkway. At the western end is the Viaduc des Arts. It's a converted viaduct for the old railway, with a parkway on top, where the tracks used to be, and shops beneath the arches of the viaduct at street level. The shops are heavily slanted towards skilled craftsmen, such as makers of musical instruments, ceramic art, etc. Many of the shops are quite interesting and even a bit eccentric. At several points, there are stairs that allow you to access the parkway on top of the viaduct. The parkway is a twisty central sidewalk surrounded by plants of all sorts, with occasional landscaping decorations such as fountains, plus many benches where you can sit as long as you want. The height of the viaduct isolates it a bit from the surroundings and makes it quieter than the sidewalks at street level. 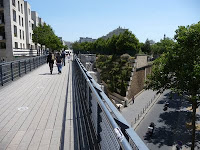 As you walk east, the viaduc eventually yields to some interesting paths that cut directly through apartment buildings. These eventually lead to the Jardin de Reuilly, a very nice little park located at the site of a station on the old railway line. The line is gone but the station has been preserved. A suspension bridge leads over the main grassy area of the park. This park is interesting because it's the first place in Paris that has a free public water fountain that dispenses fizzy water instead of flat tap water. The fizzy water is refrigerated and carbonated because … well, just because the city wanted to offer free fizzy water to its citizens. People come to fill their water bottles with the free sparkling water. There's free ordinary water, too. Both dispensers get their supplies from the tap water network, but making the water fizzy makes it more fun to drink.

Continuing east from the park, you go through a small commerce area with mostly restaurants that is level with the surrounding streets. Beyond that, the street level rises, and the Promenade Plantée continues below street level. Most of this is in a kind of open valley where the trains used to run, but there are also a few tunnels. It's even quieter than the elevated portion of the parkway. There are usually lots of people throughout the parkway, but the eastern end has somewhat fewer people than the western end much of the time. There are lots of joggers and cyclists (there are bicycle paths to keep them apart).

After walking below ground for a while, you come to another park, and the path splits up in several directions, only one of which actually continues east, so you have to make your way carefully if you wish to continue following the parkway. Beyond that is a quieter portion of the parkway well below street level. 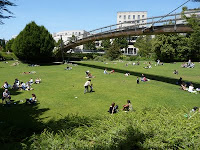 Following a relatively short walk in this area, you come to a dead end with a spiral staircase. A barrier prevents you from going further east. This is right near the city limit, just short of the boulevard Périphérique (beltway) that surrounds Paris. The staircase leads back up to street level, to a small path that runs parallel to the beltway. Beyond the barrier, the tunnels continue for a short distance and then dead-end in the suburb of Saint Mandé, which is just northwest of the Bois de Vincennes, one of the two massive parks that sit on either side of Paris and belong to the city (the other one is the Bois de Boulogne, on the west side).

All in all it's a nice one-hour stroll. I walked the parkway all the way to its eastern end, then walked back to the Bastille and then home through the city streets.

I was particularly struck by how much the trees have grown. It really looks like a jungle at some points, but that's a nice change of pace.