Not visiting the International Agricultural Show 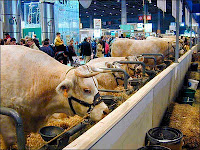 Perhaps the most attended show in Paris is the Salon International de l'Agriculture, which is held every year in Paris at about this time. The show is so big that it takes up the entire Parc des Expositions on the south side of Paris—about eight buildings, each with multiple floors, each floor the size of several football fields. Although it's intended (in theory) for farmers, it is very popular with the general public, including kids (who like to come to see the animals). It is running this week, until Sunday.

I haven't been to the show in years (the picture I've posted here is ten years old), mainly because it's too expensive. Admission this year is €12 (about $17), which is again too much for me, since I have only about €60 until the end of the month (I'll be paid mid-month, but all of that will go to rent). I had almost a full day free today and this would have been an ideal occasion to go, but there just isn't any money to do it. There never is.

Anyway, as I said, it's popular with kids because of the animals. Many city-dwelling kids don't have any opportunity to see farm animals outside of this show. There are cows, pigs, sheep, horses, etc., and some shows displaying prize-winning animals, as you'd expect at any farm show. There are lots of dairy cows, and since cows have to be milked every day, there's also a temporary dairy set up to process the milk, which you can buy after it is pasteurized, refrigerated, and packaged right on the spot in a state-of-the-art mobile dairy. When I go to the show I always buy as much milk as I can carry, since it's sold quite cheaply and of course it is very fresh (only about 30 minutes old when you buy it).

The show also features a ton of government feel-good displays about the environment and how much government is doing and how wonderful or terrible things are (depending on the interests of the government agency in question), along with displays by various industry groups. Some of these are interesting, most of them are a bit too political and self-serving.

Some of the exhibits at the show are borderline creepy. For example, you can see entire steers hanging from racks—essentially dead cattle intact with skin removed. These carcasses look way too much like the animals from which they came. You can also see exhibits of slaughtering equipment, such as devices that shock and kill poultry. It's enough to make you a vegetarian, if you aren't already (although I'm sure that's not the intention of the exhibits).

The show also has a lot of food. There's a section with foods from around France that has all sorts of tasty but pricey stuff (well, at least it's pricey for someone with no money, like me). I like the kouign amann, which is a sinfully fattening cake from Brittany, made with bread dough, sugar, and butter, all of which are pressed together and cooked for hours until the butter soaks through everything and the sugar carmelizes. Mmm. Best with fresh whole milk!

In past years I've done without the show because of budget restrictions, as I've said, but for some reason I had a hankering to go there and take some pictures for my blog this year. Alas! That is not to be, thanks to the insurmountable barrier of the admission price.

The other big show that is immensely popular and also takes up the entire Parc des Expositions in Paris is the Foire de Paris (Paris Fair) around the month of May. However, I usually can't afford that, either, and this year will probably be no exception.