Big fire in the ’burbs 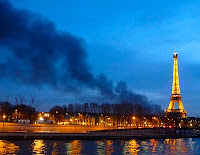 On the way home today I saw a massive cloud of smoke arising from somewhere behind the Eiffel Tower. I couldn't tell how far away it was, but when I got home I learned that it was a fire in a kind of landfill in the suburb of Issy-les-Moulineaux, which is just outside the southern city limit of Paris.

Big fires are unusual in Paris, fortunately. I recall quite a massive fire at the corporate headquarters of the Crédit Lyonnais bank (before it merged with Crédit Agricole) that was a major news story some years back. By a curious coincidence, the fire destroyed quite a bit of evidence that might have been useful in elucidating some odd things happening at the bank at the time. The building contained a lot of computers used for trading. The company took backups—but it simply left the tapes on the drives after the back-ups, rather than store them off-site. Hmm. I think that putting the fire out was great fun (in a sense) for the firefighters, though, as big fires like that are very rare. Like the fire I saw this evening, it sent smoke all across the city (Paris is only a few miles across, after all, if you don't count the suburbs—which I don't).

Fortunately none of the smoke seemed to drift towards my apartment. I don't like breathing smoke, and neither do computers.