Yesterday (Sunday, May 14) was an election day in France, with many regional elections being held. Voter turnout hit record lows.

One interesting similarity between France and the United States (or at least the part of the U.S. in which I lived) is that elections are held at local schools. In the days before an election, you see official poster boards made of dull gray metal set up outside the polling places, with various posters put up by various political parties. 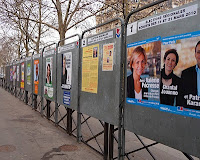 Unlike the United States, with its two stagnant lookalike political parties and its legislation that effectively outlaws every other political party, parties in France are in constant flux, with shifting policies and members and leaders, often dissolving and reforming regularly, sometimes under the same or similar names, sometimes under completely new names. The same general categorization of parties into liberal and conservative camps (called Republican and Democrat in the U.S.) exists, but beyond that, there isn't much coherency that I can see.

The Front National, an extreme-right party, made a strong showing in Sunday's first round of elections. Their posters often show blond, blue-eyed models, in order to emphasize their opposition to immigration by people with swarthy or nearly-black complexions, dark hair, and dark eyes. They seem to overlook the fact that the average French person also has dark hair and dark eyes, albeit with pale skin. Their models look more “Aryan” than French.

There are some parties that I know of that never seem to have put any candidates in any election. I'm not sure why they exist. One of them has a small headquarters near my apartment. France does not have laws that lock out all but two political parties like the U.S., so it's not too hard to put candidates in elections, but I guess some parties can't even meet the modest prerequisites for that. And yet they continue to exist, year after year.

In addition to the far-right parties, there are far-left parties that continue to nominate the same candidates year after year, who are never elected. The photos on the posters are old—the candidates never seem to age. But in real life some of them must be about a hundred years old by now. The once-strong French Communist party is mostly a shadow now; it has been in decline ever since the Soviet Union dissolved and stopped bankrolling the party, and the far-right Front National has seduced some of its membership.

Ultimately the people elected are often the same ones over and over, members of the Old Boys' Club playing musical chairs (very few girls are allowed to play). I don't know the details, as I care nothing at all about politics. I don't understand why people don't run independently on their own merits, anyway. Partisan politics tends to do a lot of damage over the long term, from what I've seen.

The French election procedure usually has two rounds, unless someone wins with an absolute majority in the first round (nobody did on this occasion). I've been told that French people usually vote for their ideals on the first round, and then vote for their wallets on the second. Elections where some extreme parties have almost won on the first round have made voters a bit more wary, I think, and perhaps they are more inclined to vote the same way in both rounds these days. When there is a second round (and there is almost always a second round), the leaders from the first round have a runoff vote, and the winner is elected.

Since I'm not a French citizen, I can't vote in these elections. But I never vote in elections, anyway. All the candidates tend to be liars and resemble each other in many ways (ambitious, power-hungry, self-centered, control freaks, etc.), and until you can force candidates to do what they say they'll do after election, most elections will just be a roll of the dice.