A change for the worse 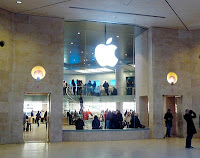 A few months ago, Apple finally opened an Apple Store in Paris, at the Carrousel du Louvre, an underground (literally) shopping center next to the Louvre Museum.

Anyway, so now there is this Apple Store at the Louvre. Rumor has it that Steve (Jobs) originally wanted to put a store on the Champs-Élysées, which would have certainly been a more logical location than a shopping mall next to one of the world's largest museums. But apparently owners' associations on the Champs insisted that all façades conform to certain restrictions—restrictions that Steve was unwilling to accept. So there is no Apple store on the Champs, but there's one next to the Louvre, now. Perhaps the powers that be in the case of the Louvre were more amenable to persuasion, whatever form that persuasion might have taken.

The Carrousel du Louvre was substantially remodeled to cater to Apple's demands. The remodeling is not an improvement. The worst change was the near-demise of the food court. This food court had been a huge boon to the Louvre ever since its construction nearly two decades ago. Prior to its existence, people visiting the Louvre came out of the museum starving and dying of thirst, since there are (were) very few places to eat or even get a drink of water in and around the museum. The food court fixed that, with high capacity, more than a dozen restaurants, quick cafeteria-style service, and reasonable prices. Apple, however, has changed all that.

Now the food court is much smaller. A good part of it had to be sacrificed to accommodate the Apple Store, which occupies two floors. There's a Genius Bar where many of the restaurants used to be. I'm not sure why Apple calls it a Genius Bar, since I do not see even a hint of genius in its design or apparent purpose. It's just a waste of space.

The remains of the food court has been redesigned with an upscale decor. The restaurants that remain are nearly all run by Autogril, an Italian conglomerate best now for its mediocre highway restaurants. The food court used to have restaurants run independently, with very different types of food. Now the restaurants all have the same shadowy parent company, and the differences are mostly illusions.

Worse yet, the prices have tripled. I guess that eating near an Apple Store has to be more expensive than eating far from an Apple Store.

Another problem is that the one and only restroom in the food court has disappeared. Now there's just a new set of fancy pay toilets down on the lower floor, far from the food court. Because of this, there's no convenient place for people to wash their hands before or after eating. This probably doesn't bother many French people, since so few of them regularly wash their hands, anyway, but it does not bode well for foreigners with higher standards of hygiene and a desire to avoid illness.

And the pay toilets, which charge €1 for everything, don't respect their posted opening hours, in the true French tradition. When I pointed out to the manager of the toilets one evening that he was closing well before the posted closing time, he said that he goes by the time on his cash-register PC, and showed me that it was many minutes fast. However, I suspect that he doesn't open early based on that time. He left a line of people with no restrooms—probably people who had walked over from the food court. (There are some other toilets way down in the bus parking garage, but they aren't known to most visitors and they are usually filthy, plus you have to pay for them, too, or at least you did last time I looked.) Of course, these pay toilets offer a delightful choice of high-fashion toilets created by different designers, but that is scant consolation when more pressing and mundane reasons for seeking a restroom command one's attention. 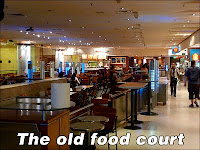 Really the only bright spot in the remodeling is the installation of a McDonalds, which the mall sorely needed. Before you start whining about this, remember that the purpose of the food court (at least originally) was to keep Louvre visitors from starving or dying of thirst. Visitors don't care about haute cuisine; they just want something to eat and drink, and they want it fast and cheap. McDonalds fills the bill, even if the rest of the new food court does not.

In any case, thanks to Apple, it's no longer possible to eat quickly and cheaply at the Louvre unless you go to McDonalds. There's a Starbucks beyond the security checkpoint, but it doesn't really serve much in the way of food. The tiny French-style snack bar near the ticket windows serves only the usual lame sandwiches and lame fruit-flavored drinks, at high prices. There's a sit-down restaurant, but of course that is overpriced and underwhelming as well.

A lot of money was obviously spent by certain people in certain ways to effect this unfortunate change to the Carrousel du Louvre. It's a pity that it works against visitors to the museum, instead of in their favor. And it's hard to believe that the same people who come to see the Mona Lisa or the Seated Scribe will also want to pick up a mother-of-pearl iPad on the way out.

I've even noticed a change in the demographics of the food court. Before Apple came, you saw mostly tourists, families, and others visiting the Louvre. Now you sometimes see Macheads loitering … that is to say, geeks who fantasize that they are artists and buy Macs to prove it—rebels without a clue who sit around in 1970s attire discussing technological issues that haven't been current in twenty years, hoping that others nearby will buy into their fantasies as wholeheartedly as they have. Everything about them spells “loser” to me (and they probably received their iPods and iPhones from Mommy and Daddy for Christmas)—and that's pretty harsh when you consider that I'm not exactly at the pinnacle of success myself. But at least I have a clue.

Oh, well … the original food court was nice while it lasted. Now visitors to the Louvre can still eat, but not as quickly, with far less choice, and at much greater expense, unless they go to McDonalds (which I consider a viable option, although many others feel otherwise).