Today I went to buy some more paste to make rice with, and I had to go to my preferred Indian grocery up by the Gare du Nord to get it, since none of the normal supermarkets near where I live seem to carry it (they sometimes carry Indian curries and stuff, but not the specific paste that I want). This involves a three-hour walk, since taking the Métro would be expensive (about $3 round-trip, which is expensive for my budget).

Lots and lots of Indian stores line the rue du Faubourg Saint-Denis above the Gare du Nord. The whole area is a bit seedy at night, and only so-so during the day, but that's where you go to get Indian stuff. The grocery I prefer has the stuff I want, which mainly means basmati rice, various curry pastes, psyllium husk (a very nice natural shredded fiber supplement), and Horlick's malted milk. I already had rice at home but I got some extra curry paste and another box of Horlick's. 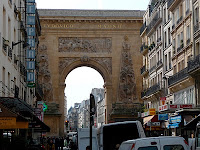 As you walk down this street south of the Gare du Nord, the Indian stores give way to groceries and other businesses catering to other immigrant populations, such as North Africans, Turks, and so on. There's a lot of variety in the foods available, if you are looking for variety. There are a lot of “taxi phone” places, too, which consist of lines of telephone booths where you can call various countries at low rates. I don't know how much lower the rates are than standard telephone rates, but the places are popular, so they must be cheap (or the people who use them don't have phones at home, one of the two). I think Skype is a better deal, but perhaps the customers of these places don't have home PCs or Internet access. 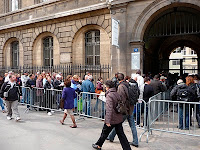 As you get to the big arch of the Porte Saint Denis, built by Louis XIV, the exotic grocery stores disappear, and they are replaced by wholesale garment merchants and prostitutes. During the day, the garment merchants reign; after nightfall, the prostitutes dominate, although there are a few prostitutes during the day, too. This area used to have busted sidewalks and cracked pavement, but a few years ago everything was repaved, with the street paved in white marble cobblestones, and the sidewalks redone in carved granite blocks. Very nice, especially with pretty streetlights added. I rather wonder why so much was spent on this particular street, which is hardly the garden spot of Paris, but it still looks nice; I'm sure the locals appreciate it.

And still I walked on, straight south (I told you that it took three hours). When you cross the river again, you're in the Latin Quarter, which is a very nice area indeed. That's where I took a right and made my way down the boulevard Saint Germain, and ultimately from there on home. No time to linger, alas! And no money to spend, anyway.