Today I saw people crowded around some brightly colored Lamborghinis on the Champs. I'm not interested in cars so I didn't bother with these, but I did pass one of them while trying to cross the street. It was in the way of traffic and pedestrians, flagrantly and illegally parked. I glanced at the plates of this one as I tried to squeeze past it in the crosswalk, and I was utterly unsurprised to see that they were Middle Eastern.

At this time of year, about 90% of the clientele in the most overpriced hotels of the city is Middle Eastern and Arab. I don't know exactly why they like Paris, but it is probably for much the same reasons that draw the other 25 million visitors per year to the city. The climate is certainly much more moderate here in summer than in the Middle East, so that's a factor (we've had increasing heat over the past few years, but still nothing like Middle Eastern deserts, except in 2003). And Paris has a reputation as a “sin city” of sorts, at least relative to many Arab countries. Arabs may come here to escape the oppressive restrictions that they endure at home, at least temporarily. Many of the women still walk around completely clothed in black, however; even here, most of the freedom is for the men. 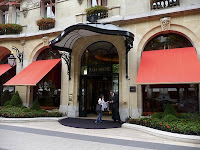 Of course, most Arabs can't afford to fly to Paris (with their cars) and stay at a five-star hotel at €20,000 per night for a week, but a substantial minority of them are quite wealthy and don't have any trouble paying for such trips. Some of them are nice, and some of them aren't. There is a lot of culture clash that can cause problems, although large and expensive hotels are accustomed to dealing with them. They bring in a lot of welcome money during periods when tourists from other areas are less numerous, so nobody objects.

One of the “palace” hotels near the Champs is the Plaza-Athenée. Its staff always takes care to park the most expensive cars out in front, so as to create the impression that all the guests are megawealthy celebrities. I don't know much about cars, but I see a fairly predictable assortment of expensive cars out in front: Ferraris, Lamborghinis, Rolls-Royces, and even a Mercedes or two for the peasants among the guests. Like most of the hotels in this category, the PA has a reputation to uphold, although it seems to have more of a car-show mentality than the others.

I once was walking past this hotel and found myself with dozens of photographers in front of me, shooting tons of pictures. I naturally realized that I wasn't the target, and then I heard someone say, in American English, “Have you had enough yet?” behind me. I assume there was some sort of Yankee celebrity behind me, although I never bothered to turn around and look. I finally squeaked past the paparazzi (I hate that word, since it's often applied incorrectly to anyone with a nice camera, but in this case there really were a few paparazzi among the photographers), and I never found out who had been behind me.