Monday marked 64 years since the liberation of Paris during the Second World War, on August 25, 1944—more specifically, it marked the surrender of Paris by the Germans to the Allies (there had been fighting for days before this).

Today, just about everyone who might actually remember that event is dead, and those who are alive are 80 years old or beyond for the most part. It's pretty much in the history books now, but there are still traces of what went on around the city today. Most of those traces are in the form of plaques that mention some person (usually a young man) who was killed on a certain spot during the Liberation. These are not to be confused with other plaques that mark places where people were shot by the Germans (particularly the Gestapo). A lot of these plaques of both kinds are in the Latin Quarter, where there was considerable fighting, but they can be found in all sorts of places. 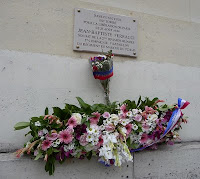 Despite the considerable time that has elapsed since the Liberation, you still see flowers placed near these plaques, at least once a year on the anniversary of the event, and often at other times. Sometimes it's the city government that provides flowers, other times it is private organizations or even individuals. Some of those nice old ladies that you see filling eight-page prescriptions at the pharmacies were teenagers at the time of the Liberation, and spent their time indoors and frightened as bullets flew about outside their windows during those fateful few days.

I'm not the type to get misty-eyed over dusty historical battles, but it is interesting to see actual direct evidence of them in the present. The United States was fortunate in that it wasn't really attacked directly in any significant way in WWII (except for Pearl Harbor, and that was a military target), but here the capital city itself was involved in the conflict, and it probably would have been bombed to the ground if France had not surrendered to the Germans. Contrary to popular belief, the French were not cowards, but they were still reeling from an incredibly bloody First World War fought largely on their soil, and the prospects of help from their allies were slim at the time, so there wasn't much choice but to recognize their disadvantaged position and give up. Surrender saved a lot of lives, but subsequent deportations cost a lot of lives as well (and some French people were extremely cooperative with the Germans in facilitating that, far beyond what the Germans demanded—these cases of eager collaboration with the Germans are still a sore subject with the French).

Anyway, there are still a few ceremonies and other events to commemorate the Liberation, even though just about all the participants were born long after the war ended. I don't bother to look them up as I'm not into military stuff.