The United States isn't the only country in which people camp out in front of stores to buy new gadgets. I've seen it in Paris, too, alas!

When the latest version of Apple's iPhone came out a few weeks ago, the big Orange store on the Champ (Orange is the operator that provides services for the iPhone in France) had a line of campers in front of it. I don't understand that kind of fascination.

Whatever its origin, though, this fascination is good for the operator and good for the manufacturer. Whoever said that Apple and Orange don't go together? 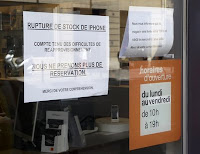 Behind Apple there is Steve Jobs, a charismatic and mercurial technology visionary, and behind Orange there is … France Télécom, a gigantic, slothful bureaucracy that for endless decades held the telephone monopoly in France. The latter provides good-quality but overpriced telecommunications services, and it has some of the worst customer service imaginable. Truly, apples and oranges! The Orange logo (in orange and black), always reminds me of Halloween (hmm). With FT/Orange you usually get reliable service, but if something breaks, getting it fixed is like a ride through a novel by Kafka.

Apple works hard to make sure that nothing is ever out of stock, but they've failed with the new iPhone, as it is out of stock in most Orange stores (possibly even the flagship store on the Champs, although I haven't checked there).

The iPod Touch, a gadget that is just like the iPhone 3G but without the phone function, is available. I've seen it in stores at only a few times the manufacturer's suggested retail price. I guess stores are willing to gouge if they can find willing gougees (and Apple groupies are among the most willing around).