Prices are going up everywhere, but they were never low to begin with in Paris.

Case in point: The things I ate yesterday. I had a can of Coca-Cola, for $1.47. For lunch, I had a ham and cheese sandwich—several slices of Swiss cheese and several slices of ham in a tiny, mass-produced roll of bread—for $6.32. In the evening, I had a large cup of ice cream for $9.29, and a vanilla Frappucino for $7.94, both because it was hot outside. 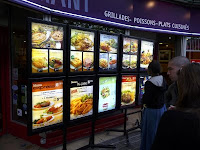 So that's $25.02, just to eat a few snacks during the day (notice that I didn't eat a proper breakfast or dinner). Unfortunately, that is typical for Paris.

You might say that I could eat at home and save money. That's partially true. If I fast during the entire day, I can eat only at home, although that tends to give me a headache. Even then, however, the rock bottom I can eat for—skipping breakfast—is about $10.50. That's still about $320 a month for food, minimum.

Food prices have gone up a great deal in the past few years. After housing, food is the largest expense associated with living in Paris.

I used to be able to buy a plain hamburger at McDonald's for $1.40 (the cheapest item on the menu, with about 280 kcal), but they raised the price of that, too.

Actually eating in a restaurant, of course, is much more expensive, typically $60-$75 a day.