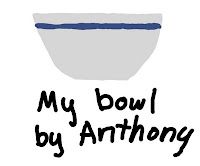 I broke my bowl today. It was a little ceramic white bowl with a blue strip that I bought from IKEA when I first moved to Paris. It was part of the “Start Box” that they sold at the time, which contained all you might need for a kitchen in terms of cups and dishes and kitchen utensils. It slipped out of my hand as I attempted to wash it in the frigid water from the kitchen sink (I don't have hot water in the kitchen), and hit the porcelain sink and cracked into several pieces. It made me sad. I don't even have a picture of it. Always take pictures of your cups and bowls before it's too late!

I am somewhat a creature of habit when it comes to things that are too trivial to merit contemplation. I had the same cheap plastic cup for many years (also from IKEA), but it finally fell and broke, as everything ultimately does if you keep it long enough. I replaced that with two Pyrex® cups (Pyrex is still made with real borosilicate glass here in Europe, whereas it is made more cheaply in the U.S.). I've been using the same two forks and spoons and butter knives for comparable amounts of time. As long as something can be washed and is sturdy, I'll keep it indefinitely. I do regularly replace my toothbrush, though (and as a result, I develop no sentimental attachment to it).

I'll have to buy another bowl, when I have some extra money.