I've been fascinated by construction and allied domains since I was little, and so naturally I was keenly interested when the city decided to repave the street in front of my apartment building.

The street is a small side street connecting to a considerably larger street (by Parisian standards). Surprisingly, this small street was paved with thick concrete. Over many years (I don't know how old the existing paving was), it had deteriorated greatly, and finally the city decided to replace it.

Streets in Paris are a bit different than they might be in the average young city in the U.S. In the city where I grew up, in the Great American Southwest, city streets were paved with asphalt, and the sidewalks were concrete, as was the curbing (the latter being cast in place by a special curbing machine). Here in Paris, the city streets are paved in a variety of ways (one of which is with asphalt), the sidewalks are also asphalt, and the curbs are carved granite blocks mortared together.

At first the construction crews appeared with a backhoe equipped with a jackhammer attachment, and they hammered regular holes into the concrete. Then they put a bucket on the backhoe and broke up and discarded the concrete, which was a surprising eight inches thick or so. They graded and compacted the dirt beneath, then they poured a new layer of concrete, of equivalent thickness, and after letting that set for a few days, they paved over it with about two inches of asphalt.

For the sidewalks, they tore up the existing asphalt (which had no base course beneath it, and was about two inches thick), compacted and smoothed the dirt, then laid new asphalt down. The curbing, which was made up of hefty granite blocks cut to fit, about a yard (one meter) long and almost a foot high, was pulled apart and then reset with new mortar and careful alignment and finishing. After it was all done, with the paving rolled smooth, new stripes were put on, made of plastic melted onto the asphalt with a blowtorch.

All in all, it wasn't too surprising, but the concrete beneath the asphalt was a surprise, as I wouldn't think that the local traffic over this tiny street would justify eight inches of concrete beneath the asphalt. Maybe it allowed a thinner coating of asphalt, and maybe the asphalt was more expensive? I don't know. I don't recall seeing concrete pours for such streets in the U.S., though, at least not where I lived. The new street should last a mighty long time, in any case.

The curbing raised questions in my mind. I asked some acquaintances of mine about it. They pointed out that granite blocks are highly recyclable, compared to continuous concrete pours. I think the continuous concrete looks nicer, but they did have a point.

This is just the way it's done in Paris. Other French cities might have somewhat different techniques (I don't travel enough to remember how other cities do it). 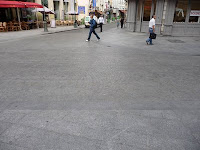 Asphalt isn't always used for street paving. There are still a lot of streets around that are paved with cobblestones. In some parts of the city, the streets are paved with white marble cobblestones, which must cost a bundle. Some sidewalks are paved with granite blocks, too, instead of asphalt. It looks nice, although vehicles sometimes drive over the (relatively thin) granite blocks on the sidewalk and crack them (maintenance vehicles and things like that). The famous Champs-Elysées is paved with granite cobblestones for the street, and rectangular granite blocks for the sidewalks and curbing. I've posted a picture with this blog entry that shows an example of (recent) all-granite paving, in a pedestrian section of the rue Montmartre.

Still other streets are cobblestones paved over with asphalt. This may be a vestige of May 1968, when the state paved over some cobblestone streets in order to keep students from prying up the stones and throwing them.

My contacts say that cobblestones have the same advantage as granite blocks for curbing, in that they can be dug up and then replaced when maintenance is necessary. Often the cobblestones appear to be simply (but snugly) set in sand, and there is no base course beneath them. They look nice, but they are noisy to drive over, and positively unnerving when you ride over them on a bicycle.

In my Paris gallery on my Web site, you can see a photo of cobblestone paving being set. It's labor-intensive and requires skilled workers, but it's very aesthetic.