Cool and rainy days, and the Fête de la Musique 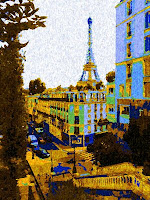 It's a bit rainy and cool today, which is just fine with me. I'm not a big fan of rain, but occasional rain is fine, and if it keeps the temperature down, I'm all for it, as long as I don't have to be out and about (which I don't at the moment).

On the way home a few days ago, I took a nice picture of the Eiffel Tower, from a spot that I won't name (if you want to find it, you'll have to come to Paris and look for it, heh-heh), and from which I've taken pictures before. The photo itself was nice enough, but once home, I opened up my crusty old copy of Photoshop and went to work on it.

I'm quite good at Photoshop. I still use version 5, for various reasons. The newest version is more than twice as expensive as my version was, since a lack of competition allows Adobe to gouge customers on pricing. It also installs a rootkit, which my older version does not. And it has no features that I want; I have all I need in the older version. Plus I'm broke … although that's a minor consideration in comparison to the others. Anyway, I manage to do various interesting things with it, well beyond what the average angry young male manages (newbies usually apply one or two filters and call the result art), since I have many years of experience with Photoshop now. 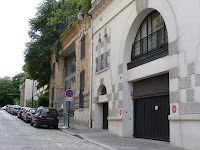 So I decided to create an impressionist painting from my picture. By applying a variety of top-secret effects and filters (some of which I originally purchased separately) to my image in classified order, I managed to come up with something that I like to characterize as being half the style of LeRoy Neiman, and half the style of Monet. It looks pretty nice as wallpaper (you can find it in the wallpaper section of my Web site). I had actually done the same thing more than a decade ago, but I lost the original, and this one looks a bit better.

I ended up on the tiny rue Fresnel (yes, named after the same French scientist who developed the Fresnel lens), which, despite its small width and length, has three buildings on it with truly gigantic entrance archways. One of these has been undergoing renovation for the longest time, the others are undisturbed. The glassed-in archway in the building on the left in my photo is actually the rear of the Iranian embassy (which is in the nearby avenue d'Iéna—Paris has embassies on practically every street corner). 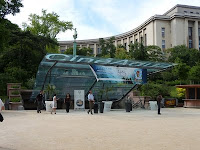 From the rue Fresnel, it was just a quick hop over to the Trocadéro gardens, and the jinxed CinéAqua aquarium, which looked practically deserted, as usual. They've added a cinema and restaurant, and lowered the price to “only” €19.50 (still nearly twice the cost of the nearby Eiffel Tower), but it still looked deserted. I would have gone in to see what the aquarium is like … but I wasn't keen on shelling out €19.50 just for that, either. I mean, the cool Sea Life aquarium at the Val d'Europe shopping center near Disneyland is way cheaper, and kids love it (they can actually feed the fish, if they want).

Anyway … let's see … on Sunday, it'll be time for the annual Fête de la Musique, which is held on the summer solstice. The sun sets at about 10 PM local time on the solstice, so it's light outside until midnight, and this encourages people to get out and listen to music. It's actually an excuse for every talent-free amateur band in the city to set up amplifiers on the sidewalks and blast away with ear-itating music for hours, but people seem to like it, as it affords opportunities to socialize and consume alcohol. I'm kind of neutral to it, and I don't plan to go out and look at it (I'm sure I'll be able to hear it—even the nearby hospital has live music on this occasion each year).