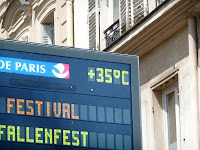 The temperature today got up to 35° C (that's 95° F), making today's high in Paris hotter than the expected high for today in Las Vegas. The normal daily high for June in Paris is 21.6° C (71° F), so today was 24° F hotter than normal. It's strange that practically nobody seems to find this worrisome. The humidity is high, too, and as usual for the summer months in Paris, there's practically no air movement.

I've turned on my tiny air conditioner, but it struggles. It's old and doesn't work very well any more. I cannot concentrate or sleep at 35° C, so I have no choice but to use the A/C. I remember the days when air conditioning wasn't really necessary in Paris, but the temperatures have been rising for 15 years now.

Anyway. I went out to wash clothes at the laundromat today. That took about 90 minutes, and I returned home drenched in sweat. I'm low on cash but I had enough to buy milk and some frozen hamburgers.

Speaking of hamburgers … although it doesn't seem to be common knowledge, France is very good at producing frozen foods. One tends to think of the country as a place where every meal is lovingly prepared from fresh ingredients by natives who toil in the kitchen for several hours a day, but that kind of situation is mostly the stuff of Hollywood stereotypes today, as few people have the time to dedicate to preparing food from scratch each day—especially in Paris.

Fortunately, there are alternatives. There's a very large chain of markets in France, called Picard, that specializes in frozen foods exclusively. Their stores contain nothing but lines of freezer cases, containing a bewildering variety of frozen meals of all types. These frozen meals are not cheap, but you get what you pay for. They are very tasty and easy to prepare, and Picard and its competitors are very popular in consequence.

For example, you can get a meal of butter chicken and riz pilaf for one person for €3.80. The chicken is marinated with Tandoori spices and cooked in butter, with a tomato and yogurt sauce. Mmm! Nuke it for six minutes in the microwave and it's ready.

Unfortunately, this is more than I can afford, but it's nice to know that it can be had. If you don't have time to cook, you can have great stuff in a few minutes this way.

The frozen hamburgers I bought aren't half bad, either. They are made by a French company that specializes in beef products, but they've branched out into other kinds of frozen prepared foods. The hamburgers are actually cheeseburgers, made with good quality meat and very good French ketchup and cheese. They are somewhat better than the stuff you get at fast-food restaurants like McDonald's or Quick, and they cost about the same. I blast two of them in the microwave and eat them with a glass of freezing cold, microfiltered, whole milk (my favorite beverage). On hot days like this I drink a lot of milk and water. I let the faucet run for a while for drinking water, because water in the (lead) pipes in my building tastes bad, but once you get water from the municipal water supply it's very nice and very cold.