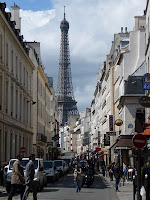 Well, it's time for me to rant again, as a blast of heat invades Paris. Today the temperature is in the eighties (Fahrenheit). That means that our high in Paris is 16° hotter than the expected high for Los Angeles today. It means that the maximum today is 22° hotter than normal for this time of year, and in fact is 12° higher than the normal yearly maximum temperture for Paris (typically attained in August, not May).

My wreck of an air conditioner isn't working very well and it's difficult to do anything in the heat; even sleeping is a problem. Since air conditioners are considered a decadent luxury by Europeans no matter how hot it gets, they are priced like gold or diamonds: a portable unit costs seven times more here than it would in the U.S., and that's way more than I can afford.

It's supposed to be cooler tomorrow, but only if my luck changes. My luck for June may reach a new nadir, with the company doctor wanting to declare me unfit to work because of health problems, the government calling me into court to formally declare me bankrupt, my landlord—or rather the building management company—dunning me for back rent that actually isn't rent (apparently they “forgot” to break out the charges correctly), TNT (a courier company, like FedEx) dunning me for a fraudulent invoice to a company I've never heard of, and much more.

Anyway, before the current heat wave, the weather was pretty nice. Sunny with fluffy clouds, the kind of weather that Paris is famous for (and the kind that's disappearing, thanks to global warming). Supposedly, tourism is down in Paris as compared to last year, but the city still seems to be awash in tourists. The tourists now are wealthier, since in hard times the poor people can't scrape up enough for overseas vacations. I still see many Americans, even though the U.S. has entered a depression.