My new mouse, and other things 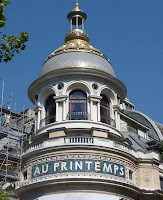 I spent a huge amount of money (in relation to my income) on a mouse a few days ago. It cost €40 (more than I'll make before taxes this week). I use a mouse a lot, so it wasn't unjustified, but it was pricey.

I can't use an ordinary, run-of-the-mill, PS/2 mouse with a rubber-covered ball inside, like the old days. The computer loaned to me these days only accepts a USB mouse. I couldn't find a traditional mouse with a USB cable, so I had to get an optical mouse. That was more expensive than a traditional mouse, even though I have a traditional mouse that works perfectly (but it's PS/2, so I can't use it). Anyway, it turns out that an optical mouse doesn't track very well at the extremely high mouse sensitivity that I set on the computer (I like to be able to sweep the entire screen with only about one inch of mouse travel, so that I don't have to move anything more than fingertips when mousing). It wobbles at slow speeds, probably because the optical resolution is too low to match the sensitivity setting.

So I got a laser mouse. It's super-sensitive, so now it works very well. I have to get used to it more, though, because it's so sensitive that just staring at it will cause it to move. It's also a right-hand model, which in theory would be fine since I'm right-handed, but since I have a graphics tablet under my right hand, I mouse with the left hand, and this mouse doesn't come in left-handed versions. Oh well. In computerland, you are always spending money, not just to “upgrade,” but often just to keep things running.

I happened by the gigantic Printemps department store (right next to its gigantic competitor, the Galeries Lafayette department store), and noticed that the façade of the building is being restored. Part of it is done, the corner tower, and it looks very nice, so I took a picture. Heck, everything looked nice today, including the Opéra Garnier, which was nicely lit by the sun, and even the Assemblée Nationale (the French equivalent of a House of Representatives in the U.S.) looked nice.

It looks like the makeover of the old American Express office near the Opéra Garnier is complete. The American Express name has been retained, but the location is actually a store for Nestlé's Nespresso coffee, which here in France is promoted by George Clooney in huge posters captioned “What else?” (in English). The Amex office was/is a landmark, which is probably why the name was preserved (Amex still maintains operations in a tiny office off to one side). It has been a landmark in Paris for decades. But times change. Now it sells expensive coffee machines and even more expensive coffee cartridges.

On the way back from school, I noticed that the Bateaux-Mouches have changed their sign. They've been remodeling the whole site for a while. The new version (of the site) looks a bit odd, but at least it's new. And they finally changed the sign, too, adding a logo and a few photos and graphics. The old sign just said BATEAUX-MOUCHES.