Public demonstrations seem to abound in springtime, especially those organized by labor unions. I've come across more than usual in the past few days. 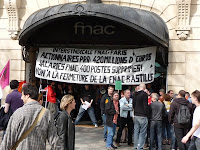 I saw one demonstration at the FNAC on the Champs recently. The FNAC is a very cool store that sells all the things I like: computers, cameras, audio and video equipment, books, CDs, DVDs … all the good stuff. Apparently it wants to close its store or cut employees at its Bastille location (I didn't really investigate exactly what the complaint was), so employees demonstrated at the highly visible Champs-Élysées store. I'm sure it won't make any difference, but they demonstrated, anyway. I think most people couldn't care less about the grievances of the demonstrators, and are simply annoyed by having to work around them or go to a different store location. This was actually a bad choice for the demonstration, since many of the customers at this store are tourists, who don't care about local labor issues, and don't understand French, anyway, so they can't understand what the demonstrators are complaining about.

Cadre today usually means “manager.” France is more class-conscious than the U.S., and still makes a sharp distinction between ordinary employees and cadres. Many French people long for the day when they will “passer cadre,” and join the managing class of society; it's a very big deal for them. I used to be cadre when I first came to France, but currently I'm not—I suppose that makes me less worthy as a human being than someone who is still cadre. It definitely makes a difference in how you are treated and what you are paid.

But in the case of the FNAC, cadre retains its older political meaning of “skilled workers,” as the store chain was started by a pair of strong socialists, to help ordinary workers gain access to good merchandise at reasonable prices. The political trappings are gone today, but the name remains. Nobody actually spells it out, though; they just pronounce it as “fnak,” rhyming roughly with “snack.” Never say F-N-A-C … that will definitely mark you as an out-of-towner.

It's a very popular store these days. It's not the cheapest store around, but it has a good selection of good products. In the days when I had money, it was a dangerous store for me, as I could not walk in without buying something before I left. Today I can't even afford batteries, so the danger is gone.

Enough with the digression. So these demonstrators were blocking the escalators at the entrance to the store, chanting into bullhorns, the usual song and dance. The usual waste of time. As the world increasingly becomes globalized, the unique practices of individual countries make less and less difference to large corporations. And old-school demonstrations like this seem increasingly anachronistic. 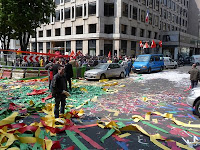 But this wasn't the only demonstration. While walking along the Avenue Montaigne, where all (well, most) top fashion designers live, I came across a closed street filled with colored bits of paper. It turns out the CGT (I've mentioned them before) was demonstrating about something. I'm not sure which company they targeted. There was a union member peppering a company representative with all sorts of questions, but since only the union member had a microphone, only the questions could be heard, not the answers. The demonstrators seemed very perturbed. I'm sure they probably wanted more money, more vacation, earlier retirement, lifetime employment, or one of those other standard things that demonstrators always want. They sure had made a mess in the street, though. The mess (along with the demonstrators) was gone when I passed later in the day—the city's cleaning army had been standing by, waiting for the demonstration to end so that they could clean things up.

In Paris, you get used to stuff like this. People on the street just trudged through all the paper and ignored the loud rants of the demonstrators. Just another day. I didn't even see anyone from the media. 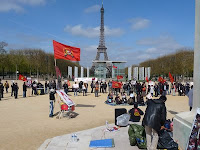 And perhaps the most unusual demonstrations I've seen lately have been “rogue” demonstrations by the Tamil Tigers around the Eiffel Tower. From what I've read, these demonstrations have not been officially authorized (that is, they don't have a permit). Which is not surprising, since the Tamil Tigers are one of the most notorious terrorist organizations around; both the European Union and the U.S. (and many other countries) formally classify them as a terrorist organization. But their demonstrations painted them as victims, and they had signs encouraging people to ask that they be removed from terrorist lists. The careful observer would see that their logo has a tiger ringed by golden bullets on it, but I could see that many people didn't quite realize what they were seeing, including some American tourists, who probably thought this group was some downtrodden helpless minority being crushed by a big bad government. These demonstrations appeared and disappeared quickly, so I suppose they were encouraged to disperse once the authorities found them. A few of the demonstrations led to violence, but fortunately I didn't see those. I think even some of the participants in the demonstrations didn't realize what type of organization they were demonstrating for.