A Stroll through Sin City

In halcyon days of yore, I had the money and time to take daily long walks (usually around three hours) through Paris. That's how I racked up no less than 50,000 kilometers of walking in the city over the years. Today I have neither money nor time, and so walking is a rare treat for me. Today I decided to take a modest stroll of about 2.5 hours in the city, for enjoyment and for health.

I took the Métro up to the place de Clichy. This is a large roundabout in the northwestern part of the city that is surrounded by restaurants and cinemas. It's fairly animated most of the time, and today was no exception, despite the chilly weather (temperatures around freezing).

Along the east side of the boulevard de Clichy, there are lots of restaurants. They range from McDonald's and KFC to standard Franco-French places like Charlot (well known for its shellfish—unfortunately I hate shellfish) and Wepler . It has a pleasant, not-too-chichi atmosphere.

As you move up the street, past the grim-looking Jules Ferry high school with its barred windows (all schools in Paris have barred windows—it makes me wonder what they do if the place catches fire), you enter infamous Pigalle, which Americans like to pronounce “pig alley,” although the correct pronunciation is “pee-gahl.” Pigalle was a French sculptor who would probably be horrified to learn what his name has become associated with. The name of this district has become synonymous with sex and naughty night life, although today it doesn't really offer anything that you wouldn't see in hundreds of Western cities. At one time it was quite unique and risqué. 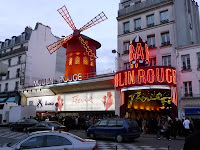 Perhaps the best-known place in Pigalle is the Moulin Rouge (“Red Mill”) dinner theater, which has a very fancy stage show and also offers drinks and dinner. It's expensive but I'm told it's pretty good (I don't do dinner theaters myself). Today you can see the same or better in Las Vegas, but here again, when the Moulin Rouge first became popular, there was scarcely anything else like it; they were doing elaborate shows when Las Vegas was still filled with tumbleweeds. The place gets its name from the large red windmill that adorns it (the original burned down years ago, but it was replaced).

Another moderately famous place is Madame Arthur, a cabaret that features top female impersonators. I've never understood the attraction of female impersonation, given that real women are so much better looking and so much more female, but this venue has been around for ages. It has kind of a swirly orangish facade that's easy to spot, although it's on a side street off the boulevard. I've never been there.

Another place less known to tourists is the Musée de l'Érotisme (Erotica Museum). It's a museum dedicated to sex. Contrary to what you might think (and contrary to many other establishments on the boulevard), it is quite tastefully done, with seven floors of exhibits. I've been there once. I'm not interested in sex, so it wasn't very engrossing for me, but it's well organized, not the seedy sort of thing that you might expect.

In times past, one of my favorite spots in Pigalle was a little shop that sold all sorts of obsolete audio and video equipment. It was fascinating to look through their stuff and see how movies, video, audio, and photography have advanced in past decades. When you compare a U-Matic portable video set-up with a modern DV Handicam, you realize how far things have come in a relatively short time. Unfortunately, this little shop has disappeared. I guess it was hard to make money selling obsolete equipment. It was more of a museum than a shop, I think.

Further down the boulevard are some other stores that I like, which sell sound and music equipment. There's a guitar shop and a drum shop, too. Very cool stuff. I am interested in music, sound, and images. I bought a compact gadget at one of these shops once that combined a mixing table with a four-track cassette recorder. It was very cool, although I wasn't sure what to do with it (I used it once or twice). I can't even remember what happened to it. I must have sold it. That was in the days when I had money.

As you continue down the boulevard de Clichy and it becomes the boulevard de Rochechouart, the sex shops gradually disappear and are replaced by discount stores selling all kinds of junk. The atmosphere becomes a bit seedier after the rue de Steinkerque (which leads up to the Sacré-Cœur basilica on the Montmartre butte), and tourists are replaced by mostly Third-World immigrants (Africa, Middle East, some from Asia). It's usually very busy but not very glamorous. Eventually, you end up behind the Gare du Nord train station.

In my case, though, I turned south at the place Pigalle and walked down towards the Opéra district. There are some side streets here with shady bars that are filled with women in underwear who beckon to people outside. They have a habit of shafting customers who come in in search of female company, and sometimes they get nasty. I wonder why a woman would be willing to sit all day at a bar in her underwear; I guess it's a living, like anything else (a woman with this job is called an entraîneuse, which means “someone who drags (you in),” because her job is to entice people into the bar and then persuade them to buy a lot of overpriced liquor).

Lower down this street (the rue Frochot, if you must know), there's a place that has some gambling (permitted in certain ways and circumstances for private clubs). And at the bottom of the street, there's a private residence (I think it's a residence) next to a private drive that includes a beautiful stained-glass window. It's kind of incongruous, given what surrounds it. Stranger still, in the window I recognize what seems to be inspiration from The Great Wave Off Kanagawa, a woodblock print of a tsunami created by Japanese artist Katsushika Hokusai around 1820—quite an odd subject.

Below that, I eventually reached the rue du Faubourg-Montmartre, which is lively as it approaches the boulevard Montmartre. On the latter I turned east, past the Max Linder cinema, one of a handful with giant screens still in business today (another is the Rex, which is just down the street). There are lots of shops on the boulevard, starting out chichi near the Opera, and then gradually transitioning into discount shops as you move east. There are also a great many restaurants of just about every type you might want. 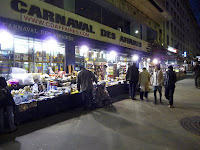 When I reached the wicked rue Saint-Denis, I turned south. If you go north on this street, you pass all sorts of ethnic groceries, and it's pretty interesting, but that was out of my way, so I went south, down a street best known today for its prostitutes. The street has been greatly improved over the past few years, with new sidewalks, new cobblestones for the streets, and so on, and it looks very nice. The prostitutes are discreet, and there were few of them out on this cold evening. Most of them usually look exceedingly weatherbeaten, making me wonder how they avoid starvation, but I saw two on this evening who had cute faces, at least (the rest was hidden under fur coats).

Occasionally you see a group of men on the street standing across from a doorway. Often these are men waiting for very cheap sex with a prostitute who accommodates one client after another, usually under duress. The men want to have sex because they think it is necessary for their health (this is not a French belief, so most of the men are in fact not French), not because they are truly interested in it, so any sex will do for them. Not a pretty picture. I read a report once about a woman who had left a convent, trusted the wrong people, and ended up being one of these assembly-line prostitutes for several years until she found a way to sneak away and escape (actually, leaving was easy, but finding someplace else to go was hard).

Glancing into sidestreets, I saw a fair number of men standing alone near some buildings. They looked like—and probably were—either drug dealers or their clients. The USA has been exporting its obsession with drugs (and its drug dealers) to Europe for years, and every year it gets worse here in consequence. 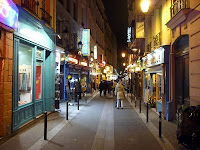 As you move south on the rue Saint-Denis, the sex shops and prostitutes fade away, to be replaced by trendy clothing stores, restaurants, and bars. By the time you reach the Forum, the change is complete, and there are a lot more people around. Here you find yet another McDonald's and KFC (not to mention another Pizza Hut, another Starbucks, another Subway, and so on). I continued through this area and on down to the river.

I crossed the river onto the Île de la Cité, noted that the Sanisettes on the island had been turned off (more paranoia, I suppose), and continued past the big Christmas tree in front of Notre-Dame to the Left Bank. The Latin Quarter was especially crowded, as it always is, and the atmosphere was wonderful, as it always is. I stopped at the McDonald's here (yes, another one), ate dinner, and hopped on the Métro to go back home.