If you can't get an Oscar, try a César 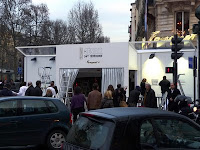 Yesterday the Césars ceremony was held in Paris. The Césars are cinema awards similar to the Academy Awards in the United States, except on a microscopic, specifically French scale. They are named after a sculptor who created the statuette for the awards, which looks very much like a washing machine that has been sent through a trash compactor.

The Césars are terribly famous in France, but essentially unknown everywhere else. Many of the awards go to people and films that will never be exported. It's interesting to see how people become fixated on something and give it tremendous importance, even as it is completely unknown and ignored elsewhere. It's a blend of the big-fish-small-pond syndrome and the local-celebrity syndrome. The Césars are front-page news in France.

It reminds me of the frequent (American) claim that a billion people watch the Super Bowl. Of course, that claim isn't true. In theory, a billion people could tune in to see the Super Bowl, but in fact nobody outside the U.S. actually does so, so the real audience is limited mainly to the United States (around 100 million viewers). But I still see American visitors in France asking what people thought of the game when Super Bowl season comes around, and they are surprised to learn that nobody here even knows what the game is.

If you want an audience of a billion, try World Cup soccer. But that event has virtually no viewers in the U.S. The world is a big place.

Anyway, the Césars are like a mini-Oscars, with a smaller budget, smaller attendance, smaller impact, and so on, but with big ambitions. I don't watch the Oscars, and so I'm certainly not going to watch the Césars. I've heard that Slumdog Millionaire won Best Picture at the Oscars, but that's all I know, and that's more than I know about the new crop of Césars.

As for Fouquet's, where the stars come after the ceremony, it's a strange place, right on the fabulous Champs-Élysées. The name, with its apostrophe, is a deliberate anglicism. In front of the main entrance, there are brass plaques in the sidewalk listing winners of the César award. The place is said to be expensive and chichi; I've never been inside. Part of the café has been designated a historical monument. At the same time, back in 1994, the establishment was cited for multiple health regulation violations, with cockroaches in the kitchen and flies on the potatoes (the then-director claimed that every restaurant has flies on its potatoes, which is news to me). And in 1999 there was a bit of a scandal over the fact that the venue wouldn't admit unaccompanied women, because it considered them to be prostitutes—I don't know if that 18th-century policy is still in place, but for me it's reason enough to stay away. Right now, there are several parties suing and counter-suing each other in a dispute over who actually owns the building in which Fouquet's is located.

In any case, I won't set foot inside Fouquet's, ever since one of their rent-a-cops assaulted me on the sidewalk in front of the café some years ago.

But I digress … let's see, who actually won the Césars? Let me look this up … Okay, a movie called Séraphine won the Best Picture César, and an actress named Yolande Moreau won the Best Actress award. Now I know more about the Césars than I do about the Oscars. I'm not sure if that's good or bad; I think it's mainly unimportant.

So why do I write about the Césars at all? Well, mainly because the festivities interfere with traffic on the Champs, that's all.

Not that I don't like movies. I enjoy movies, even a few French films, although I tend to find American films more entertaining (and if I watch a movie, it's mainly because I wish to be entertained). And I'm not alone: if you walk around Paris, you see that seven out of ten films at the cinemas are American films (usually dubbed, sometimes subtitled), so it seems that even the French aren't fond of French films.

The world of French cinema is kind of complicated. Maybe I'll discuss it in a future blog post.