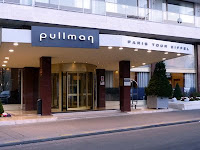 I was quite astonished to see recently that the Paris Hilton, a landmark hotel in Paris near the Eiffel Tower, has sold out to Pullman, a rebuilt up-market brand of the European Accor group of hotels. This had been a Hilton for nearly half a century, since 1966, and I hardly expected it to change hands, but it has.

The first time I noticed this, there was a film crew making a moving at the hotel, so I thought it was just a change for the movie, especially since the Pullman signs seemed stuck on as an afterthought. But no … the hotel has actually been sold, just this month. With their flagship hotel gone, Hilton now has only the smaller property near the Arc de Triomphe within the city limits; it's a nice hotel, but not as historically significant as the one near the Eiffel Tower. True, the Eiffel Tower property was showing its age—the 1960s architecture has dated badly—but it was still a nice place. I wonder where Bill Gates will stay during his trips to Paris now? (Supposedly the ex-CEO of Microsoft preferred this Hilton.) And this also ruins all sorts of Paris Hilton jokes (the Paris Hilton with big feet, not the landmark hotel).

Walking to school to save a Métro ticket (I had only 50 cent in my pocket, and no prospect of additional income until mid-March), I ran across no less than three different movie location shoots. There are about nine location shoots a day in Paris, and if you walk around on a weekday there's a reasonable chance that you'll run across one of them, but three in one morning was quite exceptional. One of them was at the aforementioned ex-Hilton. I don't know what any of them were for. You get used to seeing this sort of thing. It's like living in Los Angeles. 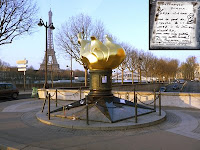 Passing the replica of the Statue of Liberty's flame on the Alma bridge, I noted that it was pretty clean, apart from a few graffiti and other junk still rambling on about Princess Diana. I suppose her groupies are all grown up now, and of course none have replaced them, since she is no longer with us (PBUH).

And strolling past one of the innumerable Vélib’ stations in the city, I was reminded of the recent complaints of JC Decaux (which has the contract for the bicycle system) that vandalism and theft are costing it huge amounts of money—supposedly nearly half of the inventory of bicycles has been stolen and has required replacement, at some $500 per bicycle. But JC Decaux has very juicy and exclusive deals with the city, so I take their complaints with a grain of salt. On the way home, by coincidence, I actually saw a Vélib’ boat carrying bicycles; perhaps that's an efficient way to redistribute them or something. 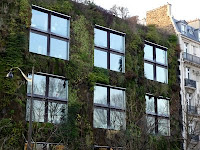 What else did I notice on my walk to work? Hmm … oh yes, there was the latest of Jean Nouvel's eyesores, the Musée du Quai Branly (there's something about that name that somehow seems appropriate for JN's masterpiece, but my desire to not nuire à la bienséance prevents me from going there). I tried to avert my gaze from the psychosis-inducing architecture of the museum itself, but I did take a look at the vegetation wall, to see how it was doing. This wall is an exterior wall that is designed to actually serve as a sort of vertical planter for all sorts of real, living plants. It still seems to be in fairly good shape, especially considering that this is wintertime. It's the only interesting and aesthetic part of the building, but it's not enough to compensate for the rest. Unfortunately, passing this building brought to mind depressing thoughts of Jean Nouvel designing a new eyesore to replace the Parc des Expositions on the south side of the city, a project that has been bandied about lately, but perhaps the current economic depression will stop that project (in which case at least something good will have come of the crisis). 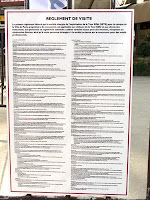 I pass the Eiffel Tower quite often, and passing it today wasn't unusual in any way, but I did notice the “Eiffel Tower Rules” while passing beneath it, and I just had to take a picture. These rules are so typically French! There are about a thousand different rules, in type so tiny that you have to practically press your nose to the sign to read them, and they are chock full of interdits and non autorisés and Article 392 bis’s, and all those other frightening, absolute phrases that the French love to put in their overly-complicated and routinely-ignored rule collections. I doubt that anyone reads these rules, least of all the French. But complex rules are part of the ingenious system of selective enforcement upon which French society is based. Everyone knows that nobody can follow all the rules to the letter, so everyone is breaking a rule. However, breaking the rules is normally “tolerated,” so it doesn't matter. But when the French establishment wants to single someone out for punishment, it looks at all the rules, and finds a rule that the unlucky victim has broken, and then prosecutes. Thus, the illusion of equality and democracy is maintained, while the reality of inequality and favoritism is practiced. Of course, France isn't unique in this respect—it is quite common in Latin countries with their Napoleonic statutory laws.

Speaking of rules, I was looking at welfare programs for renters a few days ago, at someone else's suggestion (because I'm very poor, I have to try to find ways to save or make money at every opportunity). I did a calculation on the Web site of the CAF (the agency that handles many types of welfare), and sure enough, I theoretically would qualify for help with the rent, based on my meager income. There's just one problem, though: the law requires that any apartment for which this assistance is received be equipped with hot and cold running water in the “kitchen corner” (an alcove that serves as a kind of kitchen in apartments too modest to have the real thing) … and mine lacks the hot water. Oh well. You have to fill out a 2,458-page dossier with DNA samples from your great-grandparents and pay slips from the last Ice Age to apply, anyway, so I suppose it probably would have been refused on some other basis in any case.