To the barricades … again.

(My last post here was intended for my flight blog; sorry about that. I've deleted it. —AA)

Today is an important media day because much of France is going on strike. People in France go on strike all the time, of course, because that's how they force progress (or, more often, that's how they prevent it). Hundreds of years ago, the French demonstrated in the streets because that's all they could do against the royals, and today, they seem to still prefer that inefficient way of working the popular will, even though the country is nominally a democracy with elected leaders. Old habits die hard. 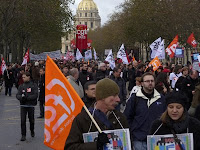 So lots of organizations are going on strike today. In France, it's mostly government organizations that go on strike, whereas the private sector is less often affected (it helps that just about every large corporation is partly owned and operated by the government, anyway). That's just the opposite of the United States, where strikes usually affect private industry. And in France, the only strikes that really make a different are transportation strikes, and they are extremely common in consequence. Transportation workers—especially the national railways and the Paris public transit system—will almost literally strike to protest a rainy day, even though they have more privileges than anyone else in the country. Given an inch, they choose to take a mile (or should I say that given a centimeter, they choose to take a kilometer?).

This means that it will be extremely difficult for people in the Paris metropolitan area to get to work today, since many live in the suburbs and commute into the city (a small minority do the opposite). I'm lucky, because I can walk to school, but many of my students cannot, so it remains to be seen if anyone will show up for class.

The exact reason for the strike is … well … actually, I'm not sure, and nobody else seems to be sure, either. Everyone wants to “protest,” and get a day off from work (at least for those participating in demonstrations—the day will be hellish for those who have to go into work). They want more money, more job security, fewer layoffs, the usual stuff, although the precise goals are a bit fuzzy. Most strikes don't accomplish anything except perhaps to maintain the status quo, and that's how I expect this one to turn out.

There was a strike some weeks ago by people working in television who were protesting the elimination of advertising from taxpayer-supported public networks (pictured in this post). As I recall, these same people protested the introduction of advertising many years ago. What they really protest is change. Everyone jealously guards his perks and his measly salary and lives in fear of any change at all in the society. The Economist said once in an article that France is among the most resistant to change of all societies in Europe, and I believe it.

Meanwhile, I'm so poorly paid that I'm considerably below the radar when it comes to things like this. Essentially everyone makes more than I do, and has better benefits and privileges. This being so, it's hard for me to relate. Others manage to pay their rent timely each month, whereas for me that is an ambitious goal and a constant source of stress (among many others). I see government workers who get $100,000 a year for driving a train and retire with full pensions at age 50, and I wonder. The country runs at two speeds: one for the good old boys and bourgeoisie with French last names, well-placed friends, and diplomas from a handful of crusty old elite schools with more reputation than substance; and another for the rest of the population.

Some people ask why I stay in France when I seem so cynical. I stay because I love Paris. If you've ever lived in Paris, you understand what I mean. But no matter where I live, I always see problems that can be solved and things that can be improved, and I'm always surprised to see that nobody does either. 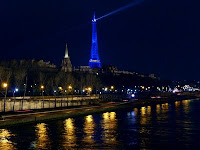 Oh well. I've spent the past 24 hours laboring to get my e-mail and Web site running again, using borrowed equipment that is literally held together by pieces of tape, as I don't have the means to do any better than that. In times past I was paid to fiddle with computers, and when your only job is to build and configure computers (as opposed to actually using them for anything productive), it's a pleasant-enough way to make money. But when you have no funds and no time and you must depend on computers to do real work, wasting hours and days and weeks slapping together bits of hardware and struggling to configure and install software gets old really, really fast. I just hope everything continues to run now for a while (like decades), because I have no resources left.

That hideous Ferris wheel on the place de la Concorde has been taken down, which lifts my spirits a bit. And the city has turned off the blatantly energy-wasteful blue lighting that it had on the Eiffel Tower last year (see my photo), and has turned on the regular lighting, which looks a zillion times better.