Out of curiosity , I tried uploading a picture to my blog. It uploaded in a fraction of a second. I had wondered about this because, while incompetent, bumbling France Télécom has pretty much destroyed my download speed, my upload speed hasn't changed. So it turns out that I can upload a large picture very quickly, even though it takes an hour to display a Web page. But enough of that. I must … not … digress—grrr!

Anyway, today was New Year's Day, which always seems to follow right on the tail of New Year's Eve. Anyway, it was amazingly quiet. Paris is a noisy city, and I'm near a noisy street, but I heard essentially no traffic noise at all for hours at a time. And the local news says that New Year's Eve was relatively quiet, too (in terms of criminal disturbances). Maybe the suburban dregs were too drunk to jump the turnstiles to come into town.

My Internet connection has been blazing away today at as much as seven percent of its normal speed. Most of the time, however, it was still down at less than one percent. 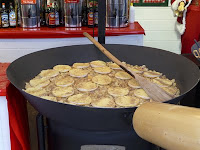 Anyway, the picture I've uploaded dates from ages and ages ago. Before Christmas, there was that Christmas village that I told you about on the Champs, as you may recall (assuming that you've been to my blog before, which is incredibly optimistic, I know). One of the stands they had was making hot dogs and tartiflette. The former was like an American hot dog, except that it contained a generous portion of real sausage, instead of the cylindrical, synthetic melamine-laced product that American hot-dog makers import from mile-long fabrication plants in the boundless industrial suburbs of Shanghai. Tartiflette is a sort of mish-mash of sliced potatoes, Reblochon cheese (the round disks in the photo—they are mixed in with the rest before it is served), ham, and some other stuff. It doesn't look very healthy but it tastes really good, especially for someone like me who normally eats mostly pound cake and peanut-butter sandwiches.

Whenever I passed this stand, it made me hungry. It had these enormous pans in which the hot dogs and tartiflette were prepared, complete with enormous wooden handles and enormous wooden spoons. On one occasion, I bought a hot dog, which was very good, albeit rather messy. On other occasion, I bought a ham tartiflette, which is served in a plastic box with a fork, and it was very good also. Unfortunately, they were expensive, so I couldn't eat them every day (the hot dog was $8 and the tartiflette was $10, which is an hour's salary for me).

Very shortly after Christmas, this village evaporated. The chalets were boarded up and gone in no time. Usually these villages stick around for a while trying to sell as many remaining vegetable-oil candles and carved wooden letters of the alphabet as they can before closing up shop, but not this one. Unfortunately, the giant ferris wheel is still there.