A modest attempt at catching up

Well, if I can just relax for a moment … what can I relate about this long period during which I've been unable to post significantly to my blog (roughly since the start of December)?

Some days ago I walked to school after one of many problems on the Métro prevented my line from taking me where I wanted to go (worse yet, the station where I'd normally change was closed—it's just one thing after another these days). Anyway, I can actually say that, yes, as a matter of fact, I did walk through several miles of snow and ice before sunrise just to get to school! And I have a picture of the Eiffel Tower at sunrise to prove it (although you can't clearly see all the snow and ice nearby). 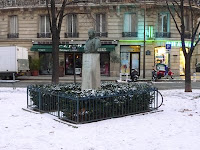 Until a few days ago, the weather in Paris was unusually chilly, below freezing almost continuously—whereas normal weather would be just above freezing during the day and only occasional dips below during the night. It had also snowed lightly at the beginning of the cold snap, so there was snow on the ground, which later turned to frozen slush and then to hard, slippery ice. Not fun to walk on, as I trudged to school in a fat parka and fleece jacket that kind friends had given me. It took a long time to pick my way over the ice, and I was late for my first class.

As I write these words (long after the events in question), it has warmed up to the middle 40s (Fahrenheit), and it has been raining for several days. So tomorrow I'll be walking in the rain instead of through snow and ice. I don't like walking in the rain, but it's safer than sliding over ice. 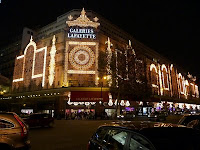 Oh, and I checked out the Christmas decorations at the big department stores (the grands magasins) some weeks ago, but thanks to the many crises I've already described in other posts, I haven't had time to post any pictures. The decorations for Printemps were lame this year; they must be on a tight budget. But the decorations for the Galeries Lafayette were bright and colorful. Both stores followed their standing traditions of decorating store windows with animated displays for children. And the stores were very, very crowded; at least someone seems to have money in Paris these days. 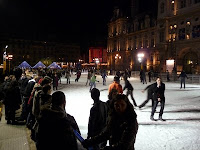 Indeed, you see little indication of any economic crisis on the streets of Paris. Maybe there are enough rich people here to mask it, or perhaps it just isn't as bad here, although my bank lost $1 billion to a certain Ponzi-scheme fraudster recently (I'll remind my banker of that the next time she alludes to me being any kind of credit risk myself).

Christmas decorations are still on the Champs, and that hideous Ferris wheel is still on the place de la Concorde, and the free ice rinks in front of places like City Hall and Montparnasse are still open (at least until February, I think). They've hardly had to refrigerate the ice lately, since it has been below freezing, but it's warm again now.