Saturday nights are laundry nights for me. There usually aren't too many people at the laundromat on a Saturday night, although there were more than usual at my favorite laundromat tonight. 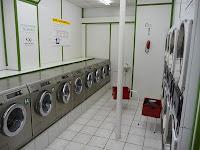 In theory I should probably wash clothes once a week, but in practice I usually wait two weeks and then wash a double load. Ironically, I have a washing machine in my apartment—but my neighbor claims that water leaks onto her floor every time I use my own washing machine, so I go to a laundromat. A plumber checked my installation and it's fine, but I think the pipes lower down are so clogged (not having been reamed out in more than half a century) that anything more than a bit of dishwater causes them to overflow.

So I filled a big plastic bag with clothing and took it to the laundromat. I wash everything in one load. I just set it to colors at 40° C and throw in some detergent and go. It takes 45 minutes to wash, and 30 minutes to dry. The machines are brand new and well maintained, and they do a very nice job. It usually costs me €11.50 to wash my regular load of clothing.

While I wait for the wash, usually I get groceries—there's a Daily Monop (a small supermarket chained owned by Galeries Lafayette) not far away that is open until midnight. However, I didn't have enough money to buy any groceries this evening, so I spent the last money I had on a Carte Orange for this coming week, and on a can of soda pop. That leaves me with nothing until payday (the middle of next month). This is going to be yet another challenging few weeks. 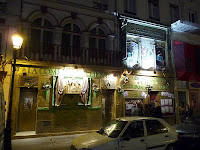 On Saturday night, people are very much out and about. It was brisk outside but not really cold, and the sky was clear. I walked around the area while I waited for the clothing to wash. Around Montparnasse, especially to the east, there are lots of cinemas and restaurants and the streets are usually full of people, so I usually walk around there on my laundry night. One street, the aptly named rue de la Gaïté, is filled with a curious mixture of legitimate theaters, sex shops, and restaurants. There's a Lido-style show on this street; it used to be a venue that featured a lot of one-man comedy shows, but I guess that wasn't profitable enough. Another place features commedia dell'arte, but all I think of when I pass it is that it looks like a firetrap, with all sorts of wooden decoration on the façade—I hope it has all been treated with fire retardant.

Down the street is a restaurant that featured an Edith Piaf impersonator for some twenty years straight. She used to appear there every night. But then, a few years ago, they remodeled the restaurant, and the impersonator disappeared. Presumably she didn't go well with the new, modern decor. I wonder where she went.

[Addendum: A signer of my guest book informs me that the Edith Piaf impersonator is Evelyne Chancel (I recognize the name now that I see it), and although she no longer appears as regular entertainment at the restaurant I mention above, she is still doing well in Paris, appearing mainly at special events—she has her own Web site here, if you'd like to learn more. — AA]

The entire area is filled with restaurants, and many of them have open outside terraces. Parisians love to eat outside when the weather is nice, so that they can people-watch and chat at the same time (and they can also smoke, which is no longer allowed indoors). Having lived here for such a long time, I sometimes forget how unusual it is in most places to see people sitting at chairs and tables outside on the sidewalk at restaurants. It's routine here.

In the same neighborhood is another theater, so minuscule that I don't think it holds more than a dozen people. The auditorium is about the size of a small living room. I guess they don't need too many spectators to break even. Another theater has a fancy, huge, and archaic façade. Overall the area is a bit eclectic but pleasant to visit. 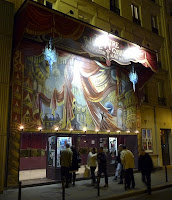 By the time I make a circuit of this area, then down the boulevard past the classic restaurants of the area (La Coupole, La Rotonde, Le Select, etc.), and move back up towards Montparnasse, it's time to go get my clothing out of the machine and put it in the dryer. Tonight there were lots of people drying things, including one who had taken up about four machines with carefully sorted clothing that he had apparently washed separately as well. He dried these four loads with different settings and then carefully folded and packed every garment. I don't understand why people expend so much energy doing such things. I just put everything in one machine to wash it, then in another single dryer to dry it. Simple. It's clean and it smells nice when it's done. I don't care if it's wrinkled.

Anyway, with the washing and drying done, I reloaded everything into a fresh plastic bag, and returned home.

It's easy to take the atmosphere of an area like this for granted when you live around it for a long time. I still remind myself, however, that many (most?) cities in the world are deadly dull, and that makes me more appreciative of the nice atmosphere that I enjoy in Paris. They don't roll the sidewalks up here at 8 PM, thank goodness. Although I can't afford to go anywhere and don't have much time to do so, anyway, it's nice to know that there's so much almost literally at my doorstep. There are dozens of movie and live theaters and restaurants within a few minutes' walk of my apartment.