Stroll through the past 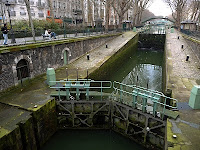 I've tried to go for a walk or two, in part for health reasons (my health is deteriorating in various ways and walking might help), and in part to try to reduce stress. I don't think the walking is working, but I tried it anyway. I decided to walk somewhere I hadn't been in ages, namely, up north of the Bastille.

I walked up the St. Martin barge canal from the little on the south side of the Place de la Bastille that connects it to the Seine River. There are a lot of tiny pleasure boats in the harbor, and there's a nice park on the east side of this artificial lake, with a restaurant (although I can't afford to eat out these days). The canal itself actually proceeds north from the harbor underground, and then eventually comes back out into the open air east of the Place de la République. The underground part is so-so to walk over—just park benches and stuff—but the canal is more photogenic when it comes back out into the open.

There's a system of locks on the canal to handle the very substantial difference in elevation between the north end, which ends at La Villette (home to a great science museum, by the way), and the Seine River. For some reason, watching barges go up and down in the locks fascinates me … I guess that proves that I'm a congenital engineer. There were no barges during my walk, though. 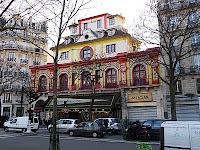 On the way up the canal I passed the Bataclan, a famous concert hall painted in all sorts of gaudy colors. It's one of those places you always hear about but never see, like Carnegie Hall. It has had its ups and downs over the years, but I guess it's doing okay these days. It is famous enough to have become a sort of rite of passage for certain categories of artists in entertainment, which helps.

I ended up at the artificial, 19th-century lake called the Bassin de la Villette, with its period buildings, its restaurants and cinemas, and its excursion boats. The boats can take you for a ride up and down the canal, and I've heard this is interesting, although I haven't tried it myself. After dark, the area fills up with drug dealers and their clients, or so I've read. By the time I finished, it was almost sunset, and I went back down towards the Gare du Nord train station, looking for groceries. There are many Indian groceries to the northeast of the station, and there's one in particular that I like, so I went there to buy rice, curry, and malted milk.

Had I had more time, I could have continued up to La Villette, a big park in northern Paris. It has a very cool science museum, as I've said, plus an Omnimax theater, a “dynamic” theater (it moves with the film, in other words), a real submarine that you can visit, an exhibition hall and a concert hall (the well-known Zénith), a music museum, and soon a symphony hall, too (unfortunately designed by Jean Nouvel—my stomach is turning already!).