Farmers of France on parade 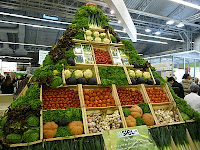 Yesterday I went to the Salon de l'Agriculture, one of the world's largest agricultural shows, which is held every year here in Paris. It is extremely popular with the public, and for good reason. It shows just about everything having anything to do with agriculture, and even people who aren't necessarily keen on farming may still find something interesting to see at the show.

The show runs for just over a week, from Saturday to the following Sunday. Saturday and Sunday are the days with the biggest crowds, when French families come to visit the show with their small children. The show is a consistent hit with children, because of the large variety of farm animals on display. Given that most of the local kids are city dwellers who may have never seen a live cow in any other context, being able to see and sometimes touch a live farm animal is pretty cool. Touching cows and bulls is discouraged—I guess they don't like to be petted—but there are many smaller animals that kids can pet, such as lambs and little piggies and so on.

As you might expect, there are competitions for animal husbandry, which remind me a great deal of the state fair in the State were I was born in the U.S.A. (we had one of the largest state fairs in the country). You see lots of prize cows, bulls, draft horses, etc. I'm always surprised by how willing these animals are to just stand still during all their waking hours; I guess it doesn't take much to keep them happy, or at least they don't show any obvious signs of boredom or stress. If anything, perhaps the noise from the crowd is more of an irritant than a welcome intellectual stimulus for them.

There many cows on display at the show, and dairy cows have to be milked several times a day, even when they're in a show. To this end, the show installs a complete set of milking stations, connected to an actual dairy, and it's possible to buy the milk produced by the cows at the show. The milking parlor and the tiny dairy are squeaky clean, and the milk is processed, pasteurized, and packaged right on the spot. The milk is sold at a very low price, so you can get a liter of absolutely fresh milk for almost nothing, and people stand in line to buy many liters of fresh, whole milk at a time. In the past, I've been known to buy and drink a liter of milk on the spot (milk is my favorite drink).

The show doesn't stop at animals, of course. It fills seven buildings, each the size of several football fields, and animals are only the beginning. There are also exhibits by government and non-profit agricultural organizations (the most boring and politically correct part of the show), and a large part of the show is dedicated to food that you can buy and eat. One section of the show exhibits food from around the world, and another exhibits food from France itself. It's best not to go to the show hungry, as the extraordinary variety of tasty food being sold by thousands of individual stands is hard to resist even on a full stomach. This being France, there are plenty of bars selling rotted grape juice and ethanol-laced beverages as well.

Everywhere at the show, you see what the French call animations, which means participatory activities, usually targeting children but also sometimes for adults. Most of them have an educational or promotional purpose. Lots of games, food tasting, videos, contests, and so on. In my small video you can see one stand that advertised “cooking meat to music,” which seemed a bit unconventional, although I didn't have time to investigate in detail.

Since I went on a Saturday, the show was packed with people, with standing room only in many areas, despite the enormous size of the exhibit grounds. Even with the crowds, though, it's fun. There was even an outdoor area where people could try their hands at driving large farm tractors. There's a tremendous emphasis on children, since so many of them visit the show, and they all seem to be happy and fascinated by what they see. It's for a good cause, since agriculture is vitally important and city dwellers often don't appreciate that without a show like this to make it clear. 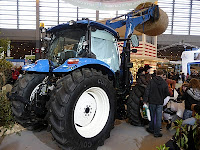 The show is also a popular stop for politicians, who make highly visible appearances there in order to show their support for farmers, who are extremely important members of the electorate in France. They smile and shake hands and so on, and sometimes they do unwise things, such as when the President of France, Nicholas Sarkozy, famously said to a visitor, “Get lost, asshole!” (“Casse-toi, pauvre con!”) after the latter had refused to shake hands with him.

I had not been to the show in years, but I went this year mainly to record some video with my tiny digital camera (which has a video function), to practice editing. That's why you'll see my eight-minute video in this post. Nothing fancy, but progress is made in baby steps, right? There wasn't time to document the entire show, so I just picked a few things. The admission was €12, up from around €9 the last time I went. I hoped also to get my mind off certain crises of which I've previously spoken during the show, but that only worked very sporadically.