I went to Versailles recently, with visitors in tow. I haven't visited Versailles on my own in years—it doesn't change much, so it's not like you have to see the “latest” Versailles each season. However, I do see it a lot with visitors, particularly in summertime. This visit was exceptional because it was in the winter.

Winter in Versailles is somewhat different from summer. The palace and buildings look the same, but they are comfortable inside, instead of stiflingly hot and humid and stale as they are in summer. This makes visiting the palace much more pleasant. There are also fewer people, although the tourists never go away entirely. At least the crowds are not unmanageable, and you don't feel you're going to be trapped and crushed while walking through the palace. Finally, the temperature outside is nice, too (read: cool). Summertime is exhausting in the gardens. The only real disadvantage is that the gardens aren't as green as they are in summer, and the statues outside are covered to prevent water and freezing temperatures from damaging them. (All the statues look the same to me, but each one is an individual work of art—the royals did not buy their sculptures at Wal-Mart.) 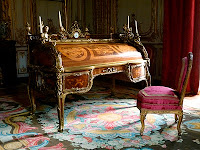 We took both the lengthy guided tour of the private apartments of the royals with a museum employee, and the self-guided tour of the Grands Appartements. The latter I know well, the former I don't often take because of time constraints. We took the English version of the guided tour, which isn't as informative as the French version, since the guides are typically much more fluent in French, but it's still interesting and lasts for about 90 minutes.

We passed through the Hall of Mirrors right at magic hour (magic hour being the hour just after sunrise or just before sunset when natural light looks especially flattering). The light was great and I got a few nice photos of the grounds outside, as well as the room itself. There were far fewer tourists than in summer, which helped, and the temperature was low enough to keep people from passing out, whereas in summertime many people just want to get out as quickly as possible after seeing the Hall of Mirrors. 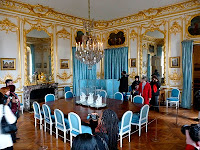 've seen most of the palace before, of course. The decor is elaborate and beautiful, albeit a bit busy for my tastes. There is very little furniture to see, however, since most of it was sold (legally) during the Revolution. Buying it back from whoever owns it now isn't always an option, and even when it is, it's expensive. One piece of furniture that the government did buy back at auction, a sort of small dresser, cost $15 million! Not exactly IKEA prices, I'm afraid.

On this tour I did see one of the royal toilets that I had not seen before. There's one on the tour that is a flush toilet of sorts, and another (the new one I saw this time) that isn't a flush toilet—meaning that a servant had to empty it by hand (ick!). Both were cleaner than the handful of filthy public toilets that are at Versailles—although one new set of toilets in the Petit Trianon were amazingly clean by French standards. Anyway, the toilets are kind of fascinating in a way, because you never hear much about how the king and his entourage went to the bathroom back then. It's kind of like movies and TV shows, where no character ever uses a toilet unless it's part of the plot. 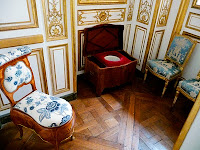 The guided tour is much more interesting than the walk-through, self-guided tour, but it is only available at certain hours. Although furniture is scarce even on the guided tour, there are a few nice pieces, such as a huge clock that will remain correct for dates up to the year 9999 (Louis XVI in particular was very fond of gadgets). Versailles also still has the king's private desk, which he used for secret stuff—it was never auctioned off by the revolutionaries. One or two rooms are almost fully furnished, and some of the furniture isn't half-bad, compared to the very over-the-top decor elsewhere in just about every room.

The guided tour also shows you the opera, which was built entirely of wood for one of the king's son's weddings, but was retained because it was so handy. It served for both performances and parties, and is still standing … and it's still used for performances.

We were also lucky on the self-guided tour because it included a temporary exposition of Louis the Various art, some of which had not been publicly displayed since the royals were still alive. It was very interesting, although not very well ventilated. Unfortunately photos were not allowed because of the poor condition of some of the art (paintings and tapestries, mainly).

Anyway, the palace tours were nice. Then came the gardens. You need a lot of stamina and good walking shoes to tackle the gardens. I usually skip almost all that with visitors, but a few want to go out and explore. The Queen's Domain—with the Petit Trianon, the Grand Trianon, and Marie-Antoinette's little park and faux village where she played pool and partied with her friends—is especially interesting, although now you have to pay to visit it, whereas it used to be free. You can spend hours in the gardens.

We managed to see her Disneyesque play hamlet, plus part of the Petit Trianon, and by then fatigue was setting in. Altogether this was a 7.5-hour visit to Versailles. I've done Versailles with other visitors (particularly large tour groups) in 40 minutes flat. Needless to say, we leave out a few things on the group tours. But not everyone has seven hours to spend at Versailles, and, more importantly, not everyone is interested in spending seven hours at Versailles. I usually don't even suggest Versailles to people who are staying in Paris for less than a week, as there are many things to see in Paris already, and Versailles tends to consume at least half a day and often a full day unless the visit is very carefully orchestrated and very condensed. 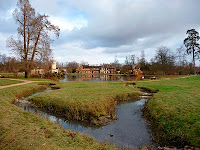 Versailles is highly deficient in restrooms and places to eat. I did manage to find a pasta salad and some banana cake, which were quite good, although there's no place to sit down to eat them.

My feet were a bit sore when I got home, which is quite unusual. However, I spent a lot of time standing rather than walking, and while I can walk for enormous distances without my feet objecting (thanks in part to excellent hiking boots), standing seems to make them tired fairly quickly.