Strolling on the right side of the tracks

So I went for a stroll in the chichi Sixteenth on the way home—where the Good People live. It's one of the most expensive districts in Paris, along with the Seventh. The Seventh seems to be somewhat more popular with retirees, but the Sixteenth has a lot of residents who are still working.

By “Good People,” I don't necessarily mean people who are nice or fundamentally noble in any way, I simply mean that they have certain characteristics in common. They are fluent in French, they buy their major appliances—instead of carrying them through broken store windows—and they don't do illegal drugs (although they may be addicted to ethanol, nicotine, and prescription narcotics),. They also remained in school past their teens, and they have good jobs, which they've obtained by knowing people in the right places. They don't have criminal records, although they may be cheating on their taxes and standing knee-deep in malversation.

Thus, they don't kill each other or set fire to cars or sing rap songs about shooting cops and beating women. However, they are not all sweetness and light, either—the French invented snootiness and snobbery, and both are widespread in the Sixteenth. Still, it's a nice part of town, with nice stores, safe streets, and polite people. It's only slightly out of my way when going to or from school, so on this particular occasion, with a bit of extra time, I decided to walk through it. The residents are not necessarily keen on intruders who do not dress fashionably and haven't been appointed to lucrative sinecures by the old-boy network, but they don't say anything. 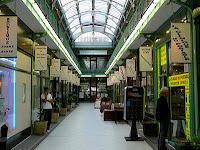 When strolling through this part of town, I usually start at the Étoile (the roundabout where the Arc de Triomphe lives), and go down the avenue Victor Hugo. This is a shopping street, with a lot of clothing shops, especially at the upper (Étoile) end. My favorite stop is the Häagen-Dazs on the place Victor Hugo. I'm not a special fan of Häagen-Dazs, but it has no local competition, so that's where I stop for ice cream, if budget permits. If I'm pressed for time, I then turn down towards the Trocadéro, but if I have more time, as I did in this case, I continue on down the avenue towards some other shopping streets. There's a nice McDonalds restaurant further down the avenue, although I don't often eat there. One of the nice things about this restaurant chain in Paris is that every location is decorated differently, and the one on this avenue is no exception. 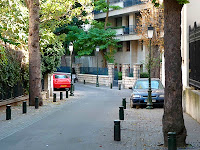 There are few pedestrian shopping galleries in this area, unlike some other parts of town, but there's one at number 111 on the avenue Victor Hugo. The gallery contains an eclectic mix of businesses with exceptionally bland signs identifying them (particularly when you contrast the signs with the architecture), ranging from a shop that produces dental prostheses to a “cell-phone clinic” to the Au Bal Masqué costume shop. The gallery is old, with a wrought-iron mezzanine and a frosted-glass roof. It's not usually interesting enough for me to step in and shop around, but the view from the entrance is charming.

Which reminds me (although I'm not sure why): Another thing that is almost totally lacking from the Sixteenth is sanisettes. I suppose the Good People don't want filthy hoi polloi gravitating towards free public facilities—“ça nuit à la bienséance”—and would prefer that they just hold it until they can crawl to some other part of town.

A little further down the avenue is the avenue de Montespan, although it's really just a small street, not an avenue. It's quite pretty … but it's a private drive. Probably populated by lots of Good People who don't want any contact with Ungood People.

(I should mention in passing that, while Google Maps has some excellent, recent, high-quality views of Paris, sometimes you'll find things blacked out. That's usually because one of the Good People with a rigid endoscope firmly lodged in his rectum has objected to himself or his car or his dog or his dog's déchets being visible on Google, despite their presence on public right-of-way, and has profited from the absurdity of French IP image law to compel Google to remove the view.) 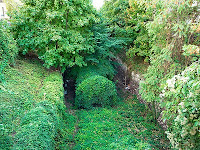 Further on, after crossing the broad avenue Henri Martin, I walked along the dismantled railway that winds briefly through part of the Sixteenth. It is sunken below ground level but open, and it looks a bit like a tropical jungle. I've seen evidence that some homeless people are living down there. I imagine they have considerable privacy, despite their location in the midst of a densely populated city, since they are well below ground level, and they are hidden by all that foliage, and it's very hard to actually get down there (and a bit spooky to contemplate). And besides, Marie-Chantal would be racked by a strong frisson of disgust at the mere thought of encountering a person sans domicile fixe.

It's rather odd, with this near-rainforest in a huge ditch in the middle of the street (or perhaps between two streets, depending on how you look at it), and these wonderful residential buildings on either side. I suppose it beats a median paved with colored gravel. Only a part of this serpentine succession of streets has the jungle; much of it is paved over today. There's a bit more jungle further north, but I had bypassed that part earlier in my stroll. Line D of the RER somehow finds its way onto this path under the paved parts up north, but I'm not sure how. The open areas are abandoned and overgrown with vegetation and very incongruous in a city where bare dirt and grass are rarer than one might think, although I like the look of these mini-jungles … from a safe distance, of course. 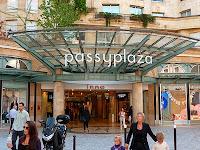 eaching the chaussée de la Muette, I turned east and headed down the rue de Passy, which is a nice shopping street. There's even a shopping center of sorts on this street, called Passy Plaza (Passy is the name of the neighborhood). One doesn't see many large shopping centers in Paris because there just isn't room, but there are some tasteful, small ones, and this is one of them. There's also a more traditional indoor market, with a very dreary 1930s facade, aptly called the Marché de Passy; markets like this often specialize in fresh food, whereas a place like Passy Plaza will be more along the American lines of shops and stores with clothing and things, most of which will be chain stores. The small shopping centers of this kind in Paris often notably lack identifiable anchor tenants—all the tenants are more or less equal. 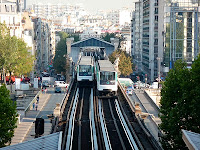 When I got to the end of the rue de Passy, I just hopped on Line 6 of the Métro and went home. I've spent a lot more time on the Left Bank, so there wasn't much interest in walking through it, and it was getting late. Passy is the spot where Line 6 comes up above ground on its way from the Étoile terminus, and you get a nice view of the river and the Eiffel Tower as you cross the river to the next station. You also get a look into lots of people's apartments as you move further down the line. I guess the people who live there figure that nobody lingers long enough to be a nuisance, so they just leave curtains and shutters open. In the evening I'm surprised by how many apartments glow with the light of a computer screen.